Strop alert! Six of the best CLUB SNAPS of all time in pro golf

Who did it best out of these professional golfers who simply believed their golf clubs needed to die? 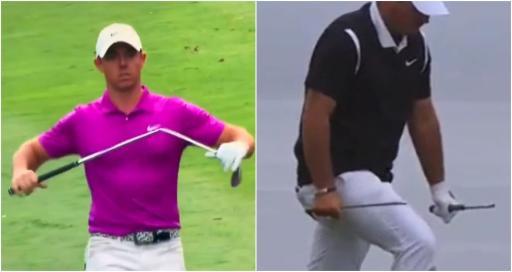 Temper tantrums are quite frequent in amateur golf but when they do happen in pro golf they can provide us with some comfort.

That comfort being that even the best players in the world are prone to lashing out at a golf club. Sometimes golf clubs just need to die.

Rory McIlroy let his frustrations get the better of him at the 2022 Arnold Palmer Invitational when he snapped his wedge.

The day before, a fan recorded him as he strutted off a green at Bay Hill and told him: "Not today, Rory. You gotta make those putts".

It's fair to say that probably that moment - along with a tough weekend course setup - had ruffled his feathers.

A dejected McIlroy later claimed he felt "punch drunk" and told how it felt like he was playing "crazy golf".

It got us here at GolfMagic thinking, what are some of the best club snaps we have ever seen?

Stenson is a HOF club snapper. No need for a tantrum. Just get the job done and move on pic.twitter.com/8cdGjwtyYG

One of the best club snaps ever from Thomas Pieters - quality! pic.twitter.com/nt1MKTIEjb

Patrick Reed on 18 is all of us. Shirt untucked, 3 foot wedge chunk, wants to snap club pic.twitter.com/x4F2trZDkH

It doesn't look like Brooks will be hitting any more drivers today... pic.twitter.com/oKklc5a1hU