Rickie Fowler and his wife Allison are expecting the arrival of their baby daughter in the near future. 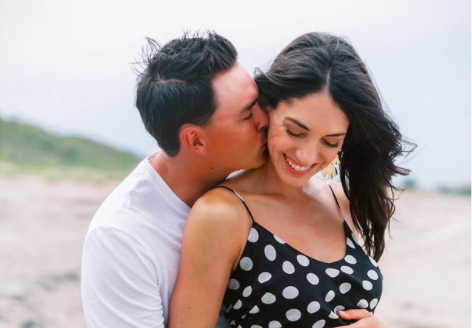 Rickie Fowler had arguably the worst season of his PGA Tour career in 2021. He could only manage one top-10 finish and he failed to qualify for The Masters and the US Open.

But tonight, he has the opportunity to put an abrupt end to his poor form. He has a two-shot lead with 18 holes to play of the CJ Cup in Las Vegas.

After a superb score of 63 on Saturday at The Summit Club, he moved on to 21-under-par with Rory McIlroy in second place. It could be Fowler's first win in two years.

The 32-year-old has been undergoing significant changes in his home life. He and his wife Allison Stokke are expecting their first baby daughter in the near future.

Stokke was born in Newport Beach, California, into a competitive, athletic family. Her brother David was a gymnast at the national youth level but she opted for the track and field route.

In 2004, Stokke recorded an incredible pole vault height of 3.86 metres, which broke the American record for high school freshmen in what was her first year competing in athletics.

Her vault was the best ever recorded by a 15-year-old and at the end of her freshman year, she went on to win the CIF California State Championship. She was starting to catch the eye as a massively talented athlete.

As a sophomore, she jumped another personal best of 4.11 metres. This mark set a new high school sophomore record and the American record for 16-year-olds.

Stokke suffered a significant injury setback, but the pole-vaulting sensation returned to win another championship at the CIF California State meeting in her senior year of high school.

But, in 2007, Stokke became an unwanted internet phenomenon when a seemingly normal photo of her was taken at a competition in New York and picked up by a blog that was known for objectifying women.

Stokke had only just turned 18 at the time, so this was an extremely unsettling period and it was controversy created through no fault of her own.

The talented athlete got through this distasteful time to attend the University of California, Berkeley, where she broke the school's freshman record with a brilliant vault of 4.11 metres.

RELATED: THE BEST PETER MILLAR GOLF SWEATERS AHEAD OF THE AUTUMN!

After trying and unfortunately failing to qualify for the Olympics games in 2012, the 32-year-old became a sportswear model and began a career in performance marketing.

Stokke and Fowler began seeing each other in 2017. They got married in 2019 and in June, they announced that they were expecting their first child together.