PGA Tour pro Mark Hubbard hated his tee shot at the par-3 11th but it went in for a hole-in-one. 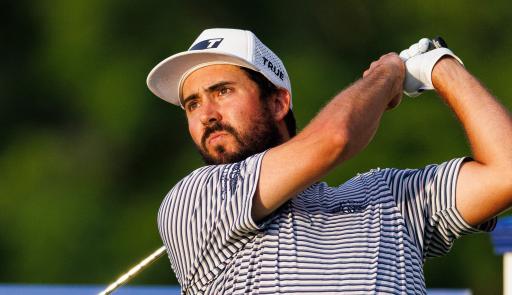 PGA Tour player Mark Hubbard turned away in disgust as he dropped his club while his tee shot was in the air on the par-3 11th in round one of the Rocket Mortgage Classic.

Only the ball hit the front of the green and trundled into the cup for a hole-in-one.

The reactions on the tee box were hilarious, check out the video below.

WATCH ONE OF THE MOST BIZARRE REACTIONS TO A TEE SHOT YOU WILL EVER SEE ON THE PGA TOUR!

Hubbard, 33, moved to 3-under par for his round once holing out for an ace on the 11th and he would end up finishing the round with a 4-under 68.

That moves him into contention for his maiden PGA Tour title.

Hubbard, who turned professional in 2012, has one Korn Ferry Tour victory to his name coming in 2019.

Tony Finau continued where he left off from his 3M Open victory last week with a blistering opening round of 8-under 64 at Detroit Golf Club.

Finau is going in search of back-to-back wins on the PGA Tour for the first time in his career and a fourth career win on the circuit.

Next Page: Luke Donald set to be named as 2023 European Ryder Cup captain after Henrik Stenson was sacked from the role due to him joining LIV Golf