Luke Donald is expected to be named the new captain of Ryder Cup Europe after Henrik Stenson was stripped of the honour after joining LIV Golf. 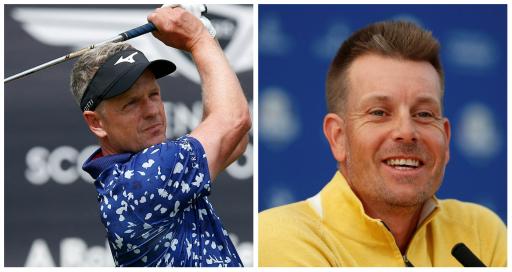 Former World No.1 Luke Donald is expected to be announced as the new Ryder Cup Europe captain after Henrik Stenson defected to LIV Golf.

The Englishman, 44, has made no secret of his desire to take charge of the Europeans in Rome next September to try and avenge their latest 19-9 defeat.

And according to a report by The Telegraph, Donald has been picked to replace Stenson after he was stripped off the captaincy earlier this month.

Donald was in the frame even before Stenson was picked. He was reportedly the player who was closest in the selection race behind the 46-year-old 2016 Open winner.

The reported decision means that it ends England's 14-year wait between captains. Sir Nick Faldo was the last in 2008 in the defeat at Valhalla.

Donald appears to have edged out Paul Lawrie and Robert Karlsson for the role. Lawrie had some interesting things to say about the prospect of Thomas Bjorn returning to the role.

The newspaper reports that the unveiling will be confirmed in the coming days. Donald has not commented, neither has the DP World Tour.

Donald has played in four Ryder Cups and was on the winning side on each occasion. Donald has also served as a vice-captain twice to Bjorn at Le Golf National and Padraig Harrington in Whistling Straits.

The paper further reports that Donald is expected to retain Bjorn and Italian Edoardo Molinari as vice-captains.

Stenson was previously stripped of the captaincy after he signed a multimillion deal to play in the controversial LIV Golf series, bankrolled by Saudi Arabia's Public Investment Fund.

Those players were the subject of fines and suspensions by the PGA Tour and DP World Tour.

Some players have resigned their memberships from the established tours to avoid litigation, while others appear ready for a showdown in the courts.

Poulter was the first to take legal action so he could participate in the Genesis Scottish Open before the 150th Open at St Andrews.

The Englishman, 44, was also on the receiving end of a few boos. He was involved in a frosty exchange with the media about it, claiming he had only received a positive reception.

Speaking yesterday, Casey outlined his reasons for joining LIV Golf. The Englishman accused the European Tour of moving goal posts with the Greg Norman-led series because he has previously played without conflicting-event releases in the past.