Hideki Matsuyama went full throttle in speed training session that even Bryson DeChambeau would be proud of in latest training video. 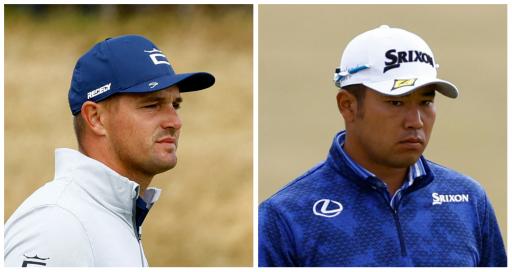 Hideki Matsuyama has been slowly trying to ditch the signature pause in his mesmeric golf swing over the last couple of years.

And now it appears to be all but gone per a video released earlier in the week capturing the Japanese golfer in a swing speed training session.

For as long as we can possibly remember, the 2021 Masters champion has been swinging with a pronounced pause when he gets to the top of the swing.

Then he'll unleash hell and in all likelihood finish one handed, expressing utter dismay at a shot that is usually better than most.

Watch the clip below:

Fernandes is actually a 51-year-old long drive competitor. And it appears his work with  the 30-year-old is actually paying dividends.

A ball speed of 194.4mph and 131.4mph club head speed is certainly admirable.

In fact, it's pretty much Bryson territory. Apparently, it's the fastest he's ever moved it. "Best ball speed," he declares in the video.

To give you a better idea of the numbers, his average club head speed on the PGA Tour this season, per the official website, is 115.164mph.

Matsuyama looks in better shape than we have been accustomed to seeing recently.

He's been struggling with injuries and was even forced to withdraw from the most recent PGA Tour event, the 3M Open which was won by Tony Finau, with wrist soreness.

Matsuyama dumped an entire sleeve of golf balls into the water in one memorable hole on his way to an opening round of 77.

Speed is obviously key in this game. It was in large part what Matthew Fitzpatrick attributed to his success at the U.S. Open at The Country Club at Brookline.

Fitzpatrick was bombing it past Dustin Johnson, much to the American's surprise.

In other Matsuyama news, he has been heavily-linked with a move to LIV Golf.

His alleged deal is reportedly worth twice as much as what Phil Mickelson signed up for.

Next page: The crazy adidas Golf rumour about LIV Golf