Tony Finau made a fast start a week after claiming his third PGA Tour victory at the Rocket Mortgage Classic at Detroit Golf Club. 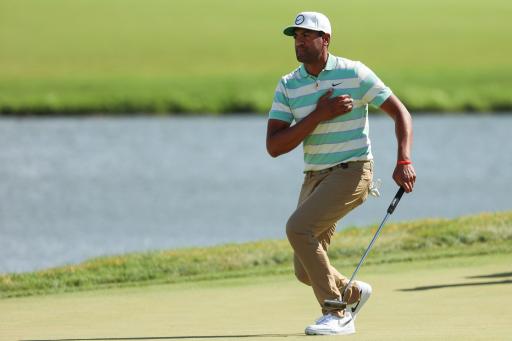 Tony Finau isn't getting ahead of himself after making a fast start at the Rocket Mortgage Classic one week after claiming his third PGA Tour win.

Finau hit all 18 greens in regulation on his way to an opening round of 8-under 64 at Detroit Golf Club.

After the first round the American, 32, shares the lead with Canadian's Taylor Pendrith. As many as five players are two strokes behind Finau and Pendrith.

England's Callum Tarren continues his good form this season and is also inside the top-10.

The moment of the day belonged to Mark Hubbard who made a hole-in-one at the par-3 11th hole from 216 yards.

Hubbard appeared to absolutely hate the shot and was as shocked as anyone to see the ball drop into the hole.

He joked to the media: "I mean, honestly, it was pretty embarrassing. Didn't quite know where the ball was going today. Taking a week off and whatever I just didn't feel as spot on and I think I let go of the club on about three of the last four shots as well and they all ended up OK.

"I just felt really stuck and I thought it was going to be way right of the green. I looked up and it was a perfect one yard draw. Wyndham actually was like, as soon as I let go, he's like, 'Dude, that better not go in'.

He added: "But sure enough it landed and trickled in like a putt. Yeah, I think that's probably going to end up being one of my favorite hole-in-ones I ever had just because of the situation.

"And none of them even gave me high-fives after."

"Obviously 64's a very good round, but this is a golf course where a lot of guys are going to make birdies, so anytime you can get off to a fast start, I think it's much needed on a golf course like this."