Max Homa has a real chance to contend for his fifth PGA Tour title after another strong display in the second round of the Fortinet Championship. 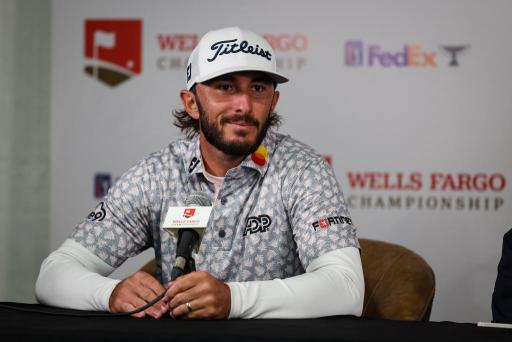 Max Homa looks in good shape to launch a strong defence of the Fortinet Championship on the PGA Tour.

Homa, 31, is now a four-time winner on the circuit. He has raced to 12-under par here after 36 holes at Silverado Resort & Spa in Napa, California.

The American, who will be making his debut in the forthcoming Presidents Cup, took a shot at the LIV Golf Tour after the first round.

"This is still the best place to play," Homa told the media after a first round of 7-under 65. He has followed that with a 5-under 67.

The low round of the day was provided by the former Masters champion Danny Willett, who carded a flawless 64 to join Homa out in front heading into the weekend.

This tournament is going head-to-head with LIV Golf Chicago. Dustin Johnson has raced out of the blocks at Rich Harvest Farms.

Elsewhere, notable players who were outside of the cut line at the Fortinet Championship include Hideki Matsuyama, Webb Simpson, Joel Dahmen.

Rickie Fowler, who has returned to work with Butch Harmon, was fighting to make the cut.

Homa was asked how his game feels compared to last year when he won.

"A little different," he told the media. "I drove the ball unbelievable last year if I remember right. This year my mid irons have been really good, but it's not too far off.

"My game honestly is -- weird to say, but my game from last year all the way to now, from this event last year to now feels very similar, which is great. It's just a testament to my coach, Mark Blackburn."

More: Phil Mickelson could back out of antitrust lawsuit

He continued: "It feels like I'm doing the same stuff, I'm just getting a little better at it, so it feels quite similar. I get on these greens and I feel like I read them really well.

"Joe [Greiner, his caddie] reads them great, so anytime I brought him in for a read I just feel like we have a good eye for the greens. So nothing feels too different, but I'm happy that -- last year I felt like I was struggling a little bit around like 150 to 200 and this week it feels much better so some of these par 3s I feel a lot more confident on. Yeah, it's not too dissimilar."