Phil Mickelson was on the original list of 11 plaintiffs to file an antitrust lawsuit against the PGA Tour, but nearly half of these players could be dropping out. 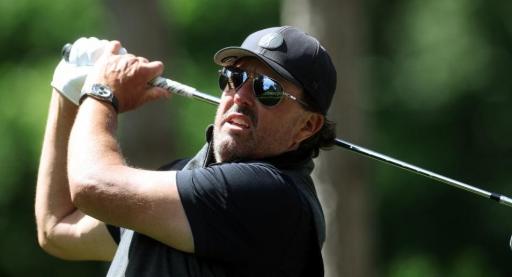 LIV Golf pioneer Phil Mickelson revealed he could drop out of the antitrust lawsuit that was filed against the PGA Tour by a group of 11 former players.

Now that LIV Golf has attached itself to the lawsuit, Mickelson feels that his involvement "isn't necessary," despite maintaining that players should still have free roam to play on any professional tour.

Carlos Ortiz, Pat Perez, Abraham Ancer and Jason Kokrak have already removed their names from the lawsuit which was first brought forward at the start of August.

Related: LIV Golf Tour Chicago, everything you need to know

A trial date for the court case may not come until January 2024. The Tour has been accused of "anti-competitive restraints" and protecting its "long-standing monopoly."

Mickelson, 52, has been one of the Tour's biggest critics, accusing the circuit of obnoxious greed earlier this year, but he also thanked it for everything it's "provided for him and his family" at the first LIV Golf Invitational near London in June.

"Now that LIV is involved, it’s not necessary for me to be involved. I currently still am. I don’t know what I’m going to do, really," Mickelson said on Thursday in Chicago, as reported by SI.com.

"The only reason for me to stay in is damages, which I don’t really want or need anything. I do think it’s important that the players have the right to play when and where they want, when and where they qualify for. And now that LIV is a part of it, that will be accomplished if and when they win."

There could now be just six players left in the lawsuit, but as this group has diminished so drastically in less than two months, who is to say none of Bryson DeChambeau, Talor Gooch, Hudson Swafford, Matt Jones, Ian Poulter and Peter Uihlein could follow suit?

Gooch, Jones and Swafford have already been on the wrong end of a legal ruling which prohibited their bid to re-enter the FedEx Cup Playoffs.

LIV Golf has now joined the lawsuit as their launch has come in "the face of super-competitive costs and artificially reduced access to (players)."

Mickelson is teeing it up at the fifth LIV Golf Invitational in Chicago this week. In his previous four starts, he has failed to finish in the top 30 on each 48-man leaderboard.