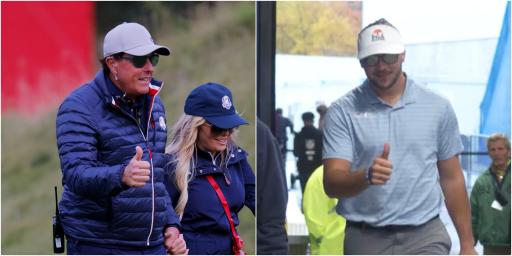 Phil Mickelson seemed to be impressed a star quarterback from the NFL turned up to matchday dressed like him.

Allen, 25, was filmed turning up to the Highmark Stadium dressed like everyone's favourite left-handed golfer.

The quarterback's outfit was not exactly half-hearted as he had Mickelson's coffee mug in his left hand.

MORE: THIS TIGER WOODS PUMPKIN WILL BLOW YOUR MIND

Mickelson seemingly plugs his Coffee For Wellness brand every chance he gets.

Allen did not stop there as after he gave a traditional Mickelson thumbs up he stopped and showed off his calves.

He even appeared to have Mickelson's mannerisms downpat by touching his cap to thank the crowd just like the hall of famer.

You could also spot a white golf glove in his back pocket.

This is how Mickelson responded.

I find this new version of Josh Allen so seductive and yet I can’t quite put my finger on what exactly it is
GoBills https://t.co/Vf84zP9p78

Other PGA Tour pros also got into the spirit of things.

Justin Thomas dressed up like the fictional basketball character Jackie Moon played by Will Ferrell.

While Tony Finau and his family dressed as the Goon Squad from Space Jam.

MORE: DOES THIS PIECE OF RORY MCILROY ADVICE WORK?