Which PGA Tour stars had the BEST Halloween fancy dress?

Some of the biggest stars on the PGA Tour took off their caps and polo shirts and got on their fancy dress for Halloween. 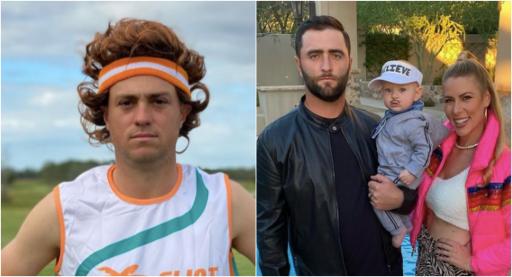 The PGA Tour landed in Bermuda this week for the Bermuda Championship and the island threw up some pretty scary conditions for the players.

While Lucas Herbert was plugging away in the wind and rain to win his first PGA Tour title, many other players were dressing up and celebrating Halloween away from the golf course.

Former World No. 1 Dustin Johnson and Paulina Gretzky celebrated the popular event at a Halloween party with none other than former US President Donald Trump.

Johnson appears to be wearing a tennis player's outfit while Trump has gone with his classic suit and red tie combination. Maybe he's not a fan of fancy dress.

Jon Rahm and his wife Kelley Cahill went down the route of film and television. They dressed up their young son Kepa as Ted Lasso, the comedy character trying to make it as a football manager in the Premier League.

Rahm dressed himself up as Roy Kent and his wife has taken the role of Keeley Jones. They are other characters from the Apple TV show 'Ted Lasso'.

2017 PGA champion Justin Thomas opted for a similar get-up as the Rahm family. He took out his wig and got his basketball kit out and took the form of Jackie Moon.

Moon is a character played by Will Ferrell in the film 'Semi-Pro' where he is the owner-coach-player of the American Basketball Association's Flint Michigan Tropics.

Two-time PGA Tour winner Tony Finau and his family had the same idea as Thomas, except they dressed up as the 'Goon Squad' basketball team from 'Space Jam: A New Legacy'.

With his wife Alayna and their five children, Finau took to the basketball court to pose for pictures. His children have got the 'Tune Squad' jerseys on.

RELATED: F1 DRIVER LANDO NORRIS BLASTED BY HIS PR MANAGER FOR PLAYING TOO MUCH GOLF!

Other players such as Max Homa, Byeong-Hun An and Jason Day and their families also joined in the festive spirit. It is always entertaining to see different fancy dress costumes every year at Halloween.

NEXT PAGE: BRYSON DECHAMBEAU: I COULDN'T ENJOY THE RYDER CUP WIN AS MUCH AS I WANTED TO

PGA tour
jon rahm
Justin Thomas
halloween
Donald Trump
Previous
The reason why Tiger Woods and Roger Federer NO LONGER speak to each other
Next
Debate: Does this piece of advice from Rory McIlroy to improve YOUR golf work?