Kevin Kisner on Tiger Woods: "Nobody on Earth can do that s*** but him!"

Kevin Kisner hilariously describes one of the greatest flop shots he's ever seen from Tiger Woods. 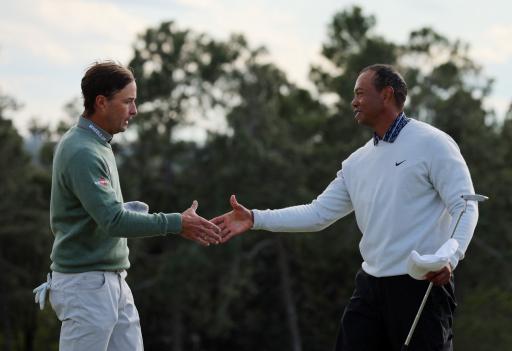 Kevin Kisner has hilariously described being a front row viewer to one of the most audacious flop shots Tiger Woods has ever hit.

Okay, so the cirumstances were not exactly what Woods would have wanted.

It was during Saturday's third round of the 86th Masters where Woods was struggling with the temperature and the wind.

By the time he had got to the seventh he had just recorded an ugly double bogey. The limp was getting greater, too.

Woods had made the cut but his score kept on going in the wrong direction. He was well out of it but still this was a moment of pure magic.

He hit a good drive at the seventh hole and split the fairway, but chunked his wedge short of the green. Fatted the f*** out of it, Kisner said.

From there, he managed to get up and down when in reality it looked like holding the green with his third would be an accomplishment.

#NEW: Kevin Kisner describes what it was like to be playing with Tiger when he hit that crazy flop shot on 7 at this years Masters. (: @ForePlayPod - new episode today) pic.twitter.com/I6USebuLOH

"He did hit one of the sickest flops I have ever seen that day though on that seventh hole," said Kisner on the ForePlayPod.

"He [Tiger] fatted the f*** out of a wedge in the middle of the seventh fairway to that front pin.

"And it's blowing 30 downwind and he's short of the front bunker like 25 yards.

"And the pin is literally, like, three [yards] on, and it's blowing downwind.

"He takes a full swing flop that lands pin high. It takes one hop past the hole and spins back to three feet.

Woods eventually carded a third round of 6-over par 78 at Augusta National.

In other Woods news, he has recently played a practice round at Southern Hills and is likely to play the PGA Championship, all being well.