This pro golfer was trying to get into the Wells Fargo Championship on the PGA Tour but endured a moment of madness. 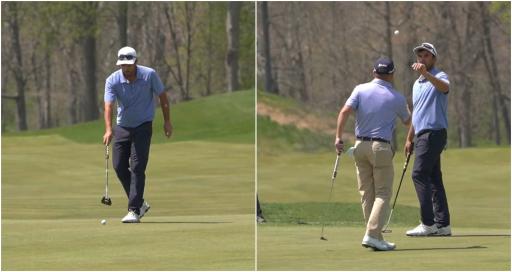 Monday qualifiers for PGA Tour events can be brutal at the best of times, but especially more so for for Ryan McCormick this week.

McCormick was trying to qualify for the Wells Fargo Championship where Rory McIlroy is the defending champion.

The PGA Tour posted a video of McCormick lipping out. Three times. This was truly horrific to watch.

In absolute fury, he then tried to scoop up the ball in anger, only for his golf ball to dribble towards his playing competitor.

His playing partner tossed him the ball, only for McCormick to throw his golf ball underhand to somewhere off the screen.

Unfortunately, it's not all too clear what score he would have made had he holed out, but he was later listed as a withdrawal after 14 holes.

McCormick, 30, is from St. Johns and is a Korn Ferry Tour regular. He has missed four of his last five cuts but is currently 23rd in the points race after a runner-up finish in February at the Astara Golf Championship.

Among the four players who eventually did qualify for the Wells Fargo Championship included the brother of LPGA Tour star Lexi Thompson.

Nicholas Thompson shot 66 to get into the $9million prize purse event.

WATCH THE FOOTAGE BELOW:

Mondays will do it to you. pic.twitter.com/NpNwwmFxER