Only 125 of the putters are up for grabs with exactly the same specifications Lefty had in the bag at Kiawah Island. 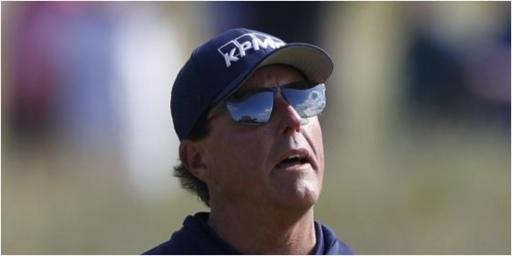 If you fancy a chance of owning one of Phil Mickelson's cherished putters then you have a tiny chance to claim one.

Odyssey have released a small batch of Mickelson's iconic flat-stick with the exact specifications he used to win the 2021 PGA Championship.

Mickelson is known to tinker with his grip but he uses the classic heel shafted blade and only 125 have been built for release.

The Odyssey putter has enjoyed a lengthy run in his bag but until now his creations have rarely come into retail.

MORE: FAN ASKS TOM BRADY FOR A GAME OF GOLF

Odyssey recently teased the golf world by congratulating Mickelson on his win when he became the oldest golfer to win a major.

They ended the Tweet with: "What if we offered a small batch of Phil Mickelson's PGA Championship putter?"

Followers welcomed the chance to own a copy of the winning putter and Mickelson replied to the comment with: "I like the idea".

Each putter comes with a certificate of authenticity personally signed by Mickelson.

You can enter the draw to win on the official website, but if you are successful then it will cost you $1,000.

This is what Odyssey say about the putter:

"The putter’s head is milled from a block of 303 stainless steel and features a deep double fly cut face mill, while a deep double fly reduces the frequency of the ball and head contact, giving Phil the softer feel he prefers.

"The heel shafted head design yields 71 degrees of toe hang for the face rotation that Lefty likes. Soft feel is further enhanced by the flare tip steel shaft, along with his SuperStrokePistol GT Tour grip, and each offering comes with the headcover that Phil used at Kiawah."

NEWS: WOMAN MOBBED ON THE TEE BY KANGAROOS IN AUSTRALIA

NEWS: UK GOLF CLUB TAKING THE FIGHT TO THE GOVERNMENT

NEXT PAGE: TIGER WOODS' SCOTTY CAMERON TO SELL FOR $1 MILLION