Tiger Woods spoke to the media for the first time since his car crash this week, and it's fair to say he has been working out at home. 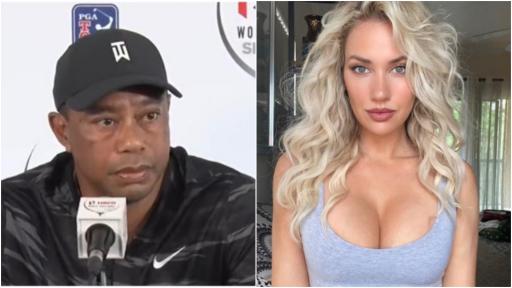 Paige Spiranac tweeted what many golf fans around the world have been thinking this week - and that is Tiger Woods looks "jacked".

Woods has been recovering from serious leg injuries sustained during his horror car crash in Los Angeles at the end of February, but it's fair to say while resting his legs he was certainly pumping some iron.

The former World No.1 held his first press conference since the accident earlier this week ahead of his annual tournament hosting duty at the Hero World Challenge in the Bahamas.

RELATED: HOW MUCH IS PAIGE SPIRANAC WORTH RIGHT NOW?

Woods was also seen bashing balls on the range in the buildup to the tournament, much to the delight of Spiranac, who tweeted: "He's jacked."

"He does look huge," said another.

Another golf fan commented: "Jacked was my first thought as well."

It is unknown as to when exactly Woods will return to competitive action but there has been strong rumour that Woods and his 12-year-old son Charlie will once again compete in the PNC Championship from December 18 to 19.

That rumour has been fuelled this morning after what Woods' close friend Notah Begay III had to say to Golf Channel.

Woods did confirm in his press conference earlier this week that he will be picking and choosing the tournaments he plays in moving forwards, most likely the majors, just as Ben Hogan did back in the day when he also had a car crash.