After dominating the entire week at TPC Louisiana, Patrick Cantlay and Xander Schauffele saw out a two-shot win with a 72 on Sunday. 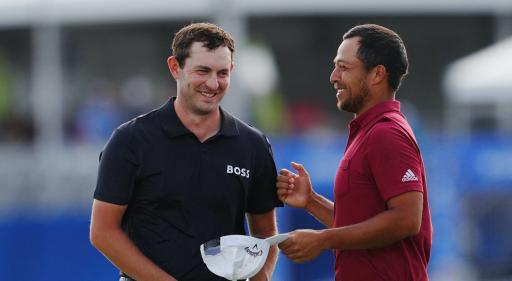 Patrick Cantlay and Xander Schauffele became the first-ever wire-to-wire winners of the Zurich Classic of New Orleans at TPC Louisiana.

Rounds of 59, 68 and 60 gave the American pair a healthy advantage at the start of the final round and despite a small blip around the turn in Avondale, their level-par 72 gave them a two-shot win over Sam Burns and Billy Horschel.

Having played together in the Ryder Cup and the Presidents Cup prior to this week, Cantlay and Schauffele beat the 72-hole winning record total of 27-under-par previously held by Jonas Blixt and Cameron Smith.

Cantlay, who lost in a playoff to Jordan Spieth at the RBC Heritage last week, is the first player to follow up a playoff loss with a win the following week since Dustin Johnson in 2020.

Cantlay and Schauffele began the day with a five-shot lead over Garrick Higgo and Branden Grace and they extended their lead with a superb eagle on the par-5 7th hole.

A touch of class.@Patrick_Cantlay and @XSchauffele head to the 72nd hole with a 3-shot lead. pic.twitter.com/xbBMDFWbzi

They reached 31-under-par but while they looked in cruise control, Burns and Horschel made a fast start with three birdies in their first eight holes.

Related Articles
Collin Morikawa on crunch PGA Tour meetings: "We are rolling the dice"
Justin Thomas caught up in rules fiasco at Tiger's event: "What is going on!?"

Now the gap was one and we had a game. After a superb drive and putt by Schauffele on the par-5 11th hole, the dynamic duo made another birdie to build a two-shot cushion on 30-under-par.

As Burns and Horschel chased birdies, they could only make pars. They faltered on the par-3 17th hole when they toiled for a bogey and now the gap extended to three shots with Cantlay and Schauffele safely on the short par-4 16th green in two.

The pair bogeyed the final hole to finish on the score they started on in the final round to complete a comfortable victory together. This was Schauffele's first win on the PGA Tour since 2019.