There were some great songs played and laughs on the first tee box in the third round of the Zurich Classic of New Orleans. 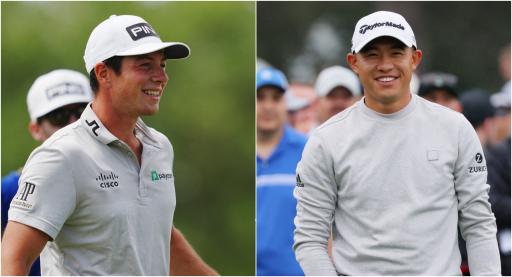 The Zurich Classic of New Orleans is such a unique competition that combines fourball better ball and foursomes in one superb format.

We rarely see these two formats played away from the biennial Ryder Cup and it regularly produces stunning scores and carefree golf.

At one end of the spectrum, we have Patrick Cantlay and Xander Schauffele taking a record five-shot lead into the final round and we have also seen Jay Haas make the cut with his son Bill at the age of 68.

Another great feature of the event at TPC Louisiana is the walk-on music that the players arrive to on the first tee box in round three. On Saturday, there were some great selections.

One of the highlights was Justin Rose and Henrik Stenson's emotional entrance to 'All of Me' by John Legend. The 2023 European Ryder Cup captain put on a particularly good acting performance for this.

Related: PGA Tour pro given FRIGHT OF HIS LIFE at Zurich Classic of New Orleans

The first tee introductions @Zurich_Classic are one of a kind. pic.twitter.com/cfpFKJbfh9

Bubba Watson and Harold Varner III came on to 'Coming in Hot' by Lecrae and Andy Mineo and Patrick Cantlay and Xander Schauffele walked on to the serious tune of 'House of the Rising Sun' by The Animals.

You can always rely on Joel Dahmen to provide a show for the fans in Avondale and there is no doubt that he insisted on him and Stephan Jaeger walking on to 'Who Let The Dogs Out' by Baha Men.

Collin Morikawa and Viktor Hovland, who are currently 13 shots behind Cantlay and Schauffele in a tie for 28th place, childishly chuckled as they entered the first tee to 'Sandstorm' by Darude.

Sam Ryder and Doc Redman chose the vibrant tune of 'Uptown Funk' by Bruno Mars, but sadly we didn't see any dance moves to match.

Russell Knox and Brian Stuard went for the obvious song selection of 'Straight down the Middle', while Shane Lowry and Ian Poulter made a self-deprecating decision to choose 'Under Pressure' by Queen.

Next Page: Have you found your perfect rangefinding device yet?