Patrick Reed to Golf Channel: "As you know, if the ball bounces, it's literally impossible for the ball to plug." 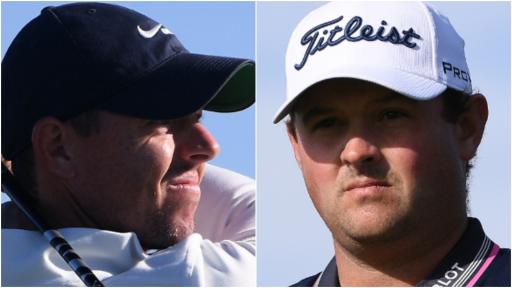 Reed's name was trending on Twitter yesterday after he decided to pick his ball up out of the rough, before calling a PGA Tour rules official over to check the situation.

According to Reed, he was told that his ball did not bounce and he believed it was embedded - meaning he would be granted a free drop - but video evidence showed his golf ball did bounce before ending up in the rough.

Reed took matters into his own hands, picked up the ball and moved it to the side in the rough before PGA Tour Rules Official Brad Fabel came over to inspect the situation.

Fabel put his finger down to inspect the ground where the ball had been lying in the rough, and he claimed to have felt a "lip", and therefore deemed Reed to be correct and that the ball was embedded. Reed received a free drop and free relief, before draining a 15-foot putt for par.

He endured a wretched back nine featuring four bogeys, but birdied the final hole for a round of 70 to join Carlos Ortiz out in front on 10-under par after 54 holes.

Jon Rahm carded a level-par 72 to remain on 8-under par, while McIlroy matched Reed's score of 70 to move three strokes off the pace on 7-under par.

Thousands of golf fans, journalists and professionals were having their say on Twitter about Reed's controversial embedded ball ruling - one of which was European Tour pro Eddie Pepperell, obviously.

But despite a large majority of tweets questioning the American's actions on the 10th hole, Reed's Twitter account went on the offence by comparing the ruling to Rory McIlroy's on the 18th hole.

See the tweet below that was posted late Saturday night:

Reed spoke to a number of the media after his round to explain his side of the story. One of the most interesting comments he made was to Golf Channel.

Reed said: "As you know, if the ball bounces, it's literally impossible for the ball to plug."

Watch his full interview below:

Patrick Reed gives a full walk-through of his situation on No. 10. pic.twitter.com/2crxsKFLzC

While Reed did not know his ball had bounced at the time of picking up his ball to check it was embedded in the rough, he did once he was in the scorer's hut after his round, and before giving his interviews to the media.

Hundreds of golf fans were quick to react to that specific comment from Reed:

"As you know, if the ball bounces it is literally impossible for the ball to plug at that point"

And yet, he claims it did break the surface.

Watch/Listen https://t.co/uoauZIfv4W
Patrik Reed literally DQ himself! At 2:10 he says "we all know a bounced ball does not plug". WE SAW THE BOUNCE, so Patrick Reed is lying! @PGATOUR it is your call!

Reed: “if the ball bounces, it’s literally impossible for the ball to plug.” Also Reed: “there was a lip on both sides, therefore it [had] broken the plane of the ground.” Sounds like self-incrimination to me.

it’s literally impossible for a ball to plug after it bounces. - Patrick Reed

after reed says if he knew it bounced it’s literally impossible for it to plug, why did the reporter not say

“did you see the video that your ball bounced? how was it possible it then plugged?”

NEXT PAGE: PATRICK REED GIVES HIS SIDE OF THE STORY