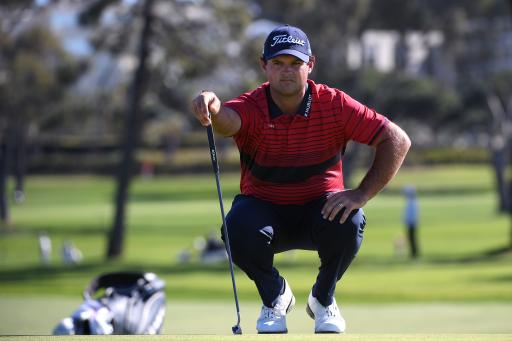 Reed, 30, entered the final day with something of a cloud over him following his controversial "embedded ball" ruling at the 10th hole on Saturday, but he kept his composure to card a 4-under 68 and finish five shots clear on 14-under par.

6th hole for @PReedGolf this weekend:

Reed began the final round in a tie for the lead with Carlos Ortiz but soon took the outright lead when draining a 45-footer for eagle at the par-5 6th. He then added another birdie at the par-4 7th to move two strokes clear of the chasing pack.

The American then bogeyed the par-3 8th but bounced back with another birdie at the par-5 9th to resume control of the tournament.

Viktor Hovland tried his best to hang on to the coattails of Reed around the turn, but the talented Norweigian was left to rue costly bogeys at 14, 15 and 17 as he handed the tournament on a plate to Reed.

Despite the controversy that surrounded his "embedded" ball ruling at the 10th hole during the third round, Reed praised his mental attitude for getting the job done in the final round on Sunday.

"The biggest thing was that you just had to be resilient out here on the golf course," said Reed, who now moves back inside the world's top 10.

"When it came down to yesterday, I heard from the rules official and did everything I was supposed to do. That's all you can do is go through the correct steps to protect the rest of the field."

He added: "Even with the ball bouncing, we didn't know it bounced. The rules official came over to check and the surface was broken, so from that point, you just go from there. I was comfortable with how everything transpired. I tried to do the right thing and tried to move on."

Tony Finau surged late but found the water with his second shot at the par-5 18th and his resulting bogey saw him finish tied second on 9-under par. alongside Ryan Palmer, Henrik Norlander, Xander Schauffele and Hovland.

World No.2 Jon Rahm had a weekend to forget with consecutive rounds of 72 and he finished in a tie for seventh with Will Zalatoris and Lanto Griffin on 8-under par.

Rory McIlroy got to within three strokes of the lead when making a birdie at the par-3 8th, but he had a back nine to forget with bogeys at 10 and 13 followed by a double bogey at the 15th to fall well out of contention on 6-under par.

NEXT PAGE: PATRICK REED EXPLAINS HIS SIDE OF THE STORY WHEN IT CAME TO HIS "EMBEDDED" GOLF BALL