Paulina Gretzky: "Dustin Johnson told me ABSOLUTELY NOT to Playboy!"

Paulina Gretzky revealed on the "Pillows and Beer" podcast that she was made an offer by Playboy around the time she began dating World No. 1 Dustin Johnson. 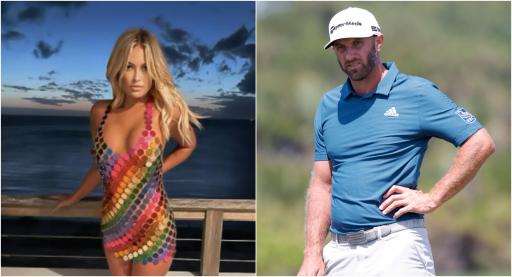 Paulina Gretzky revealed that Playboy made her an offer around the time she began dating Dustin Johnson, but the World No. 1 golfer rejected the idea.

Speaking on the "Pillows and Beer" podcast with hosts Craig Conover and Austen Kroll, Gretzky said that around 2013, Playboy, the famous and popular American magazine, asked her to join them.

However, despite the proposal being a good opportunity for Gretzky at the time, when she put the idea to Johnson he instantly rejected it.

"I do have a Playboy story," said Gretzky.

Does Pat Perez owe Si Woo Kim $100,000?: "I’m not paying him anything"
Patrick Cantlay leads at The American Express as Jon Rahm struggles

"Playboy asked me to do, you know, Playboy and I was like 'yes this is a great opportunity.' It had to be right when we started dating in around 2013.

"They gave me an amount and a number and Dustin was like 'absolutely not I'm going to match it, you're not doing it.' Even though money wasn't the thing, I could tell it bothered him so it was fine."

The pair began seeing each other in 2013 and were engaged soon after dating. They have two young sons together named Tatum Johnson and River Jones Johnson.

Although they have been a happy couple for a long time now, they are yet to get married. However, Gretzky, who is a model, actor and singer, also revealed on the podcast that they have a date and venue decided and she explained why they hadn't got married until now.

"I just did things my own way, I just didn't want to listen to how everyone else viewed things," added Gretzky.

"The most important thing was my kids and Dustin and his career and those things took precedence. Those things needed to be established and after he won The Masters, I thought 'let's do it, let's get married because now is the time, this makes sense.'

"This guy (Johnson) has no downtime. The stresses from getting everything ready for a wedding would take over mine and his life and what I needed to be was his teammate. I needed to be there for him to support him and love him and make sure he is accomplishing what he needed to do."

NEXT PAGE: RORY MCILROY DRIVES INTO WATER WITH FIRST SHOT AT US PGA CHAMPIONSHIP