Paulina Gretzky opens up on her struggle with BLINDNESS 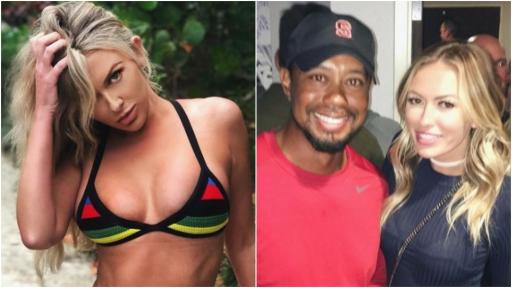 Gretzky, who spoke openly about all things on and off the golf course in an episode of 'Pillows and Beer', claimed she can only see in "one out of 10 blinks."

RELATED: "DUSTIN TOLD ME NOT TO DO PLAYBOY" - PAULINA

FOUR THINGS we want to hear from Tiger Woods at Hero World Challenge
Lee Elder: How speeding ALMOST prevented him from watching Tiger Woods win in 97

Paulina was offered a choice of drinks by the podcast hosts, including Sauvignon Blanc and Monster Rehab Tea, and it was there that her revelation came to light.

"I don’t think I’ve had a Monster [Energy] since 2007," joked Paulina as she checked the ingredients on the label. "I get scared, they make me jittery."

She then elaborated on her sight issue.

"Well, I’m legally blind, so give me a second to read this.

“So, I’m not a candidate for Lasik, unfortunately.

"One out of ten blinks I can see; it’s very, very frustrating.

"A lot of people think I’m mean because I’m not saying ‘hi’ to them.

"Truly, I cant see your face; it’s not an excuse; I really can’t see you."

It was an extra special celebration for the couple as Johnson was the top points scorer for the week going 5-0.

He becomes only the third player to go undefeated during a Ryder Cup week.

Johnson and Gretzky have been together for many years now but they will finally tie the knot at Blackberry Farms in Tennessee in 2022.

NEXT PAGE: PAULINA LEADS THE CELEBRATIONS AT THE RYDER CUP