Golf's royal wedding is complete after Dustin Johnson and Paulina Gretzky finally said "I do" after being engaged for nine years. 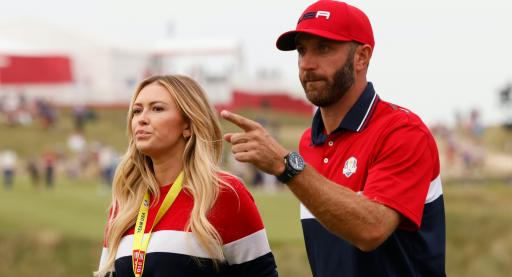 Dustin Johnson and Paulina Gretzky finally tied the knot over the weekend in one of the most glamorous weddings you can possibly imagine.

Related: Paulina Gretzky teases wedding ahead of tying the knot

The couple officially said "I do" on Saturday, 23 April in a ceremony at the luxurious Blackberry Farm resort surrounded by family and friends.

Paulina teased her followers on Instagram last week to confirm we were finally at wedding week.

DJ was waiting as she landed on her private jet and surprised her with a new handbag before the festivities and rehearsals got underway.

The couple have two children. Tatum is seven years old and River is four years old. They have been engaged since 2013.

Paulina is the daughter of the ice hockey legend Wayne Gretzky and it was his wife Janet introduced who their daughter to the golfer.

The rest is history.

When it came to exchanging vows, they married in an intimate outdoor ceremony.

They now reside in Florida. When asked about their long engagement, Paulina said: "I just did things my own way, I just didn't want to listen to how everyone else viewed things.

"I fell in love with someone so fast and we just had the best thing that's ever happened to us happen so quickly."

Before the wedding, Paulina shared an image on Instagram with a letter by DJ that read: "Paulina, you are the love of my life. I'm counting the seconds until I marry you. I love you to the moon and back. Dustin xo."

After the couple made it official, Kid Rock performed at the party afterwards. Look at that grin on DJ!