Justin Thomas shone a light on the interesting dynamic he shares with his father and coach Mike at the PGA Championship. 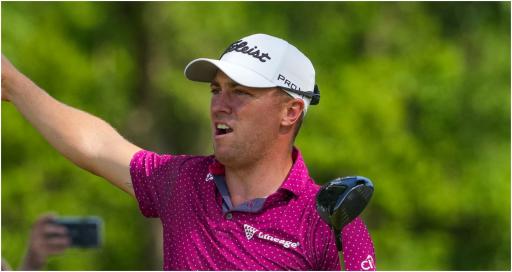 Justin Thomas has revealed the interesting dynamic he shares with his father and swing coach Mike Thomas after starting well at the PGA Championship.

Thomas, 29, fired a solid opening round of 3-under par at Southern Hills Country Club to put himself firmly in the mix and is only two strokes behind Rory McIlroy who came out of the blocks quickly in a major championship "for a change".

For Thomas, though, he has been battling "crushing" allergies for most of the week and admitted he didn't feel great with his preparation. He was a little congested even when he spoke to media.

Even during range sessions with his father he has "not felt comfortable" over the ball. Thomas said: "I got a little frustrated yesterday with my dad, and I'm just trying to figure out how to feel better over the ball.

"Then he was like, 'Well, let's just start trying to hit some shots, like put a stick out, like let's hit some fades, hit some draws', and then immediately [I] just started flushing it and hitting it how I wanted."

As ever with Thomas, much of the talk concerns how he struggles to convert his stellar form on the PGA Tour over to the majors.

He has only won one major championship and that was the 2017 PGA Championship. Quite simply, he has not performed when it matters.

Even he knows and has said as much. The Masters, in particular, was frustrating for Thomas as he started with a bizarre opening round of 4-over 76 and admitted he just couldn't concentrate.

He followed that with an angry 67 to make the weekend.

Thomas has started well in Oklahoma and his putting, in particular, was a strong point when perhaps in previous opening rounds of major championships it has been a weakness.

He was asked about the unique relationship he shares with his dad.

How exactly does he navigate those tense moments on the range when things aren't going to plan with father Mike?

Thomas said: "It's a lot different. I get pissed at him sometimes, and I think as a dad he doesn't want to -- he's not going to go full Butch Harmon or Pete Cowan and tell me I suck or that's not very good or whatever it is, and sometimes I would love for him to say that just because I want to hear it.

"I mean, I have to remind him sometimes, you're not my dad out here, you're my swing coach, and I need you to tell me if something is wrong. I don't need my ego boosted. I'm here to try to win a golf tournament and play well, so do your job kind of thing.

"It's gotten a lot better over the last couple years, but it's like any player-coach relationship. You need that accountability, I think."

Tiger gets grumpy with camera operator at Southern Hills

Dustin Johnson reveals what "difficult" wedding job he had

Why Bryson DeChambeau withdrew from PGA