Tiger Woods didn't reveal if he would play at The Masters at last week's Genesis Invitational, but he will be attending the Champion's Dinner. 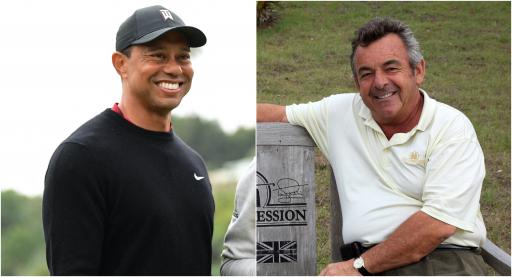 European golf legend Tony Jacklin wouldn't be surprised at all if we saw Tiger Woods playing at The Masters in April.

Jacklin, whose best finish at The Masters was tied 12th in 1970, believes Woods is making good progress but did point out the hilly terrain at Augusta may not be ideal.

Woods confirmed at Riviera Country Club that he will return to the PGA Tour, but there is no date or tournament set for his comeback.

The 46-year-old also revealed his frustration with his rehabilitation and admitted the age factor hasn't helped to speed up his recovery.

"It looks to me like he’s making good progress. He’s downplaying a lot of it," said Jacklin, who spoke exclusively to GolfMagic in association with BoyleSports golf betting.

RELATED: SIX REASONS WHY THE SAUDI GOLF LEAGUE WILL NEVER GO AHEAD

"He alluded to the fact that walking the course is going to be a difficult thing for him, but it wouldn't surprise me one bit to see him walking up and down the fairways of Augusta National in six weeks.

"He keeps everything close to his chest, he’s got such a strong mind. Augusta is a tough one as one of the things people don’t realise is how uphill and down dale it is. He is making good progress.

"He came down on the side of the PGA Tour (against the SGL) and he’s had a wonderful career up to this point with the PGA Tour and finance is not an issue for him. You couldn’t spend what he’s got in ten lifetimes."

RELATED: ZACH JOHNSON NAMED NEXT US RYDER CUP CAPTAIN FOR CLASH AGAINST EUROPE

Woods and his son Charlie returned at the PNC Championship in December, however, this was an unofficial PGA Tour event that suited the 'hit n' giggle' style he has previously described.

When in the commentary booth with Sir Nick Faldo and Jim Nantz at the Genesis Invitational, he implied that the par-3 contest at The Masters could be something he could play in.

As Jacklin says and by what we saw when Woods won his 15th major championship there in 2019, you should never rule out Woods or doubt his ability to return.