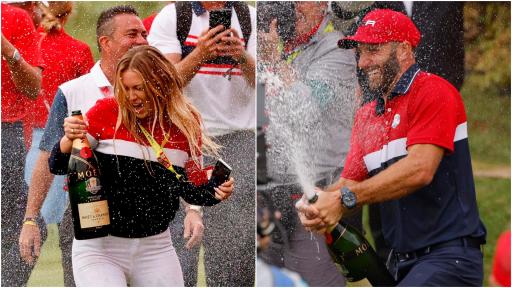 Dustin Johnson and Paulina Gretzky were not only celebrating Team USA's record 19-9 rout over Team Europe at Whistling Straits last night, but also the former World No.1 individually entering his name into the record books.

Johnson won all five of his matches over the three days, meaning he now joins Larry Nelson, Arnold Palmer, Gardner Dickinson and Francesco Molinari to go 5 and 0 during a Ryder Cup week.

DJ won his Friday foursomes match alongside Collin Morikawa 3&2 (vs Paul Casey and Viktor Hovland), before joining up with Xander Schauffele in the afternoon fourballs for another 2&1 victory (vs Casey and Bernd Wiesberger).

He then returned on Saturday to win 2&1 once again with Morikawa (vs Casey and Tyrrell Hatton), and for a third time with Morikawa in the fourballs in a convincing 4&3 win (vs Ian Poulter and Rory McIlroy).

Johnson then beat Casey for a fourth time in the Sunday Singles 1up.

Steve Stricker's US side led 11-5 heading into the 12 singles match and won the final session 8-4 to see out a record 19-9 scoreline.

The previous record stood at 18.5-9.5, something USA had only achieved once and Europe twice.

Johnson ended up not only being the top points scorer at Whistling Straits, but he also scooped the inagural Aon Nicklaus-Jacklin award.

The award is in recognition of the two players who best embodied the spirit of the infamous 1969 concession at Royal Birkdale.

After years of speculation, Dustin and Paulina are finally set to get married this year, having got engaged back in 2013.

Earlier this year, Paulina revealed that they are to get married at Blackberry Farm, a five-star resort in Walland, Tennessee, which has an attractive brewery and other great features.

The actress, singer and model posted a picture on her Instagram page, where she has one million followers, of her and Johnson at a venue with white decorations around the tables.

It is not clear as to whether this is a shot taken from their future wedding venue and it is still unclear as to when it is taking place.

However, this could be a clue that the much-anticipated wedding is fast approaching.

NEXT PAGE: DUSTIN JOHNSON SAYS HE IS UP FOR SHARING A BED WITH COLLIN MORIKAWA AFTER RYDER CUP WIN