"I'm fine with this, this is the best way to make the lowest score..." 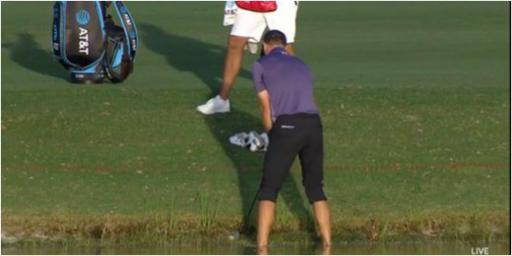 Jordan Spieth produced another stunning shot only he would know how to execute in round one of the Hero World Challenge.

The Texan, 28, who recently became a father to baby boy Sammy, got himself into a spot of bother at the 18th hole in Albany, Bahamas.

Spieth sent his tee shot way left and the ball trickled into the water and came to rest up alongside another ball in the reeds.

The creative American player, known for his flair and short game wizardry, called in a rules official to assess the situation.

"Can you guys call somebody," Spieth said, his trousers rolled up with shoes and socks off.

"It landed on the rock, Bryson," Spieth said dejectedly to his playing partner DeChambeau, walking back onto the fairway.

Spieth said he thought the lie would mean the ball would come out skinny.

Spieth added: "I'm fine with this. This is the best way to make the lowest score."

Greller, with Spieth eyeing something heroic: "If you were -6, would you hit this shot or ... [points other direction]?"

Ditching the shoes and socks.@JordanSpieth rolled up the pants for this shot. pic.twitter.com/7tnUBIF17Q

Spieth was allowed to move the ball that was close to his. He wasn't sure as it looked embedded, he said.

He picked up the rogue ball and chucked it away.

The shot was 153-yards to the hole. Spieth took it on. He got back into the water and took one almighty swipe.

He got it on the green and it trickled to the first cut. Another miraculous shot. Unfortunately, he couldn't save his par.

Spieth signed for a 1-under 71 which will frustrate him as he had started well. He's five shots off the lead.