PGA Tour commissioner Jay Monahan has sided with Rory McIlroy's recent comments of "limiting alcohol sales on the course", but declined to address Justin Thomas' situation where a fan shouted "get in the bunker" at the Honda Classic.

Fan behaviour has become a hot-button topic on the PGA Tour in recent weeks, but Monahan has revealed the Tour is monitoring the situation closely moving forwards from this week's WGC-Dell Technologies Match Play.

“When you have people who aren’t behaving properly and they’ve had too much alcohol, then I agree [with McIlroy],” said Monahan. “In those incidences those people who are making it uncomfortable for a player alcohol sales should be cut off.” 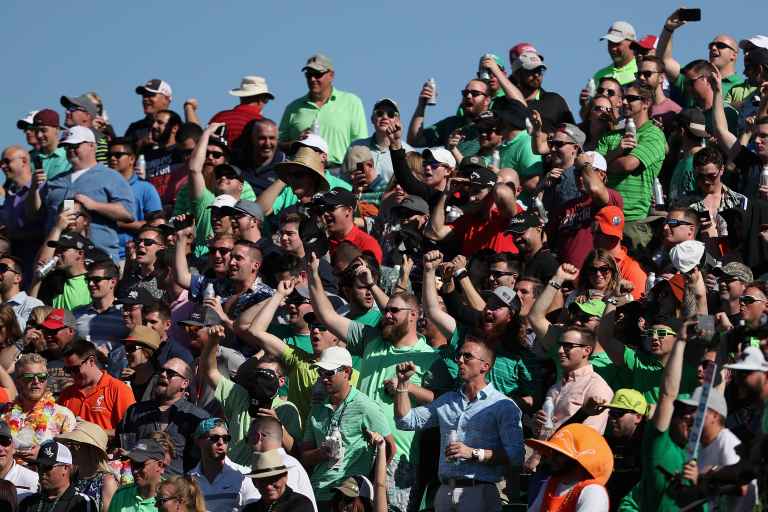 Fan behaviour became an issue with some players when Tiger Woods returned to competition at last month’s Genesis Open.

During the final round of the Honda Classic some four weeks ago, Thomas had a fan removed when he yelled for Thomas’ tee shot at the par-4 16th hole to “get in the bunker.”

Monahan declined to address Thomas’ situation at PGA National specifically, but he did seem to suggest that as interest grows and the Tour continues to attract more mainstream sports crowds, vocal fans will continue to be the norm.

RELATED: JT APOLOGISES FOR GETTING FAN EJECTED FROM HONDA

“I believe that there was more that went into it that preceded and in a situation like that we’re hopeful our players will reach out to our security staff and they can handle that,” said Monahan.

“[But] yelling, ‘get in the bunker,’ that’s part of what our players have to accept. In any sport, you go to an away game, in any other sport, and people aren’t rooting for you. Sometimes out here you’re going to have fans that aren’t rooting for you, but they can’t interfere with what you’re trying to do competitively.”

Justin Thomas
Rory McIlroy
PGA tour
alcohol sales
Honda Classic
Arnold Palmer Invitational
wgc match play
<
Previous
Justin Thomas plays a shot out of a bush, and still gets some spin!
>
Next
Sergio Garcia takes his shoes off to play shot from cart path!
Latest News
Golf news
NEW Glasgow golf facility to "revamp the sport" set for Summer 2023 launch
Golf news
Paige Spiranac takes on troll with selfie of 60-something mother
Equipment news
TaylorMade launch Hi-Toe 3 Wedges; focus on versatility and performance
Golf news
Is this the most DANGEROUS hole in the world of golf?
Equipment news
Fujikura extends VENTUS TR line of golf shafts for 2022
Latest Reviews
Wedges
The SECRET To Improving Your Short Game? PING ChipR Review
Drivers
Most UNDERRATED driver of 2022?! Honma TW757-S Driver Review
Footwear
Under Armour HOVR Drive 2 Golf Shoes | Best Golf Shoe review
Irons
TaylorMade Stealth UDI and Stealth DHY | Best Driving Irons 2022
Irons
I Did NOT Expect This! Cobra Forged Tec ONE LENGTH Review 2022
Equipment Reviews
Equipment
Peter Millar have an AMAZING selection of golf shorts!
Equipment
The BEST PUMA golf polo shirts as seen on the PGA Tour!
Equipment
The BEST Nike Golf shirts as seen at the PGA Championship
Equipment
NEW VICE Pro Drip Silver Hills Golf Balls: Limited Edition
Equipment
Golf Betting Tips: Our BEST BETS for Round One of PGA Championship
Latest Tips and Instruction
Tips and Instruction
Learn how to chip like a winner on the DP World Tour!
Best tips and instruction
What can we learn from Jordan Spieth's new pre-shot routine on the PGA Tour?
Tips and Instruction
How to NEVER MISS another short putt with Manolo Vega!
Tips and Instruction
Sergio Garcia tells Me and My Golf GREAT driver tip: "Pull the chain!"
Tips and Instruction
Top golf coach Manolo Vega teaches you how to ATTACK pin from 50 yards
Related Articles
The Open Championship
Why Justin Thomas told Shane Lowry to "shut the f*** up" at The Open
The Open Championship
The Open: Golf fans react to Justin Thomas' outfit on day one at St Andrews
The Open Championship
Justin Thomas reveals what Tiger Woods said about The Open after car crash
The Open Championship
Tiger Woods RIPS Justin Thomas over not winning The Open Championship
The Open Championship
Tiger Woods' evening stroll at St Andrews ahead of The Open was a vibe