From meeting in a bible study to winning The Masters together, it has been quite the ride for World No.1 Scottie Scheffler and his caddie Ted Scott. 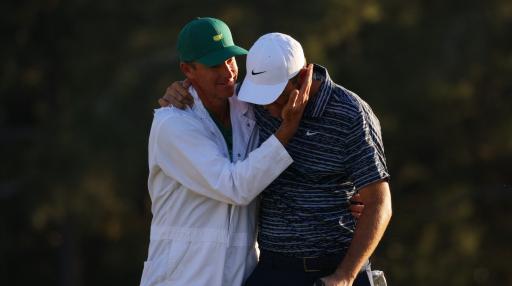 Scottie Scheffler and his caddie Ted Scott treated Augusta National as a walk in the park last week as the World No.1 romped to his first major title at The Masters.

Since joining forces in the autumn of last year, they have won four times on the PGA Tour. It is not even May yet and Scheffler has earned himself just over $9 million this season.

As reported by Rick Gehman, if we assume that Scott receives a 10% cut of what his player earns, the successful caddie has made himself approximately $900,000 in 2022.

If we then look at the current PGA Tour money list, he would be ranked in 78th place ahead of Doug Ghim, Matthew NeSmith and Alex Smalley.

Scott is an Augusta National specialist. He caddied for Bubba Watson for 15 years and together, they won 12 times on the PGA Tour and Watson became a two-time Masters champion.

It was a surprise when Watson announced the end of their relationship towards the end of 2021, but he told the media at The Masters that he and Scott are still great friends.

"I have no regrets," Watson said.

"And I don't think he does either. He has made more money now without me. He [said he] needed ten more years - He is like he needs ten more years, and I gave him -- I felt like a nice retirement package when we split up, but we split up mutually.

"We're still great friends. We hang out. We played practice rounds together a couple of tournaments ago."

Scheffler, who has won four times in his last six appearances on the PGA Tour, first met Scott in a bible study and spent time with him at the 2021 Zurich Classic of New Orleans when he and Watson teamed up.

Scheffler thinks the world of Scott and their flourishing relationship was there for all to see in Georgia last week.