What Tiger Woods' daughter Sam said during his Sunday Masters round

Tiger Woods has spent his sporting life surprising the public, but even his daughter couldn't believe it at The Masters. 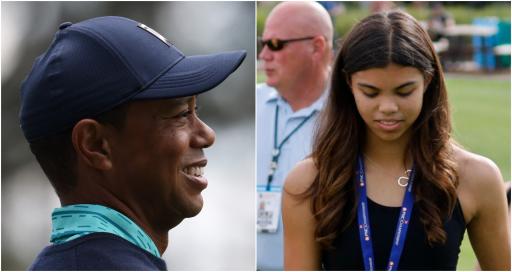 Tiger Woods arrived at Augusta National last week and told us he believed he could win The Masters.

We wouldn't have expected anything less from Woods, 46, but by the time he limped off the final green he had a huge grin on his face.

In ordinary circumstances his weekend showing of 78-78 would not have been celebrated but Woods showed true grit and determination to get through.

How many times would you see him chatting, laughing and joking with a competitor during a final round of The Masters as he did with Jon Rahm?

Woods has repeatedly said he would not turn up to a major unless he believed he could truly win. But perhaps, deep down, Woods might just keep turning up at the big ones just like Jack Nicklaus did.

Both said they would not be ceremonial golfers, but do they really mean it?

This was a victory for Woods and he absolutely knew it. "Some of the guys know, they've seen the pictures," he said of his right leg.

There is no denying that Woods has a knack for surprising us all. Those in the Woods camp will have known the true picture of what he has been through.

Justin Thomas said he was "horrified" when he saw images, whilst Woods added: "I don't think you understand what it took to get here."

Even his teenage daughter, Sam, reportedly was surprised when she watched her father play his final round. "It's miraculous, it shouldn't be happening," she reportedly told Golf as Woods completed his fourth round.

"It's miraculous. It shouldn't be happening." —Tiger’s daughter Sam said during the final round of the Masters. (via @GOLF_com)

In other Woods news, the 15-time major champion has officially committed to The Open Championship at St Andrews this summer.