Bubba Watson has lifted the lid on why he split with Ted Scott in the wake of Scottie Scheffler's brilliant Masters victory. 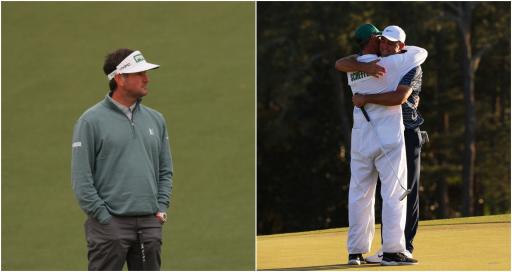 Bubba Watson and Ted Scott once seemed like a duo who were inseparable. They were brothers. Bulletproof.

Related: Scottie Scheffler and Tedd Scott: A duo made in heaven?

But take your mind back to September of last year and Watson made a frankly shocking announcement.

He announced a parting of the ways with Scott, who had been on the bag through all 12 of his PGA Tour victories and two Masters triumphs.

Watson stuck around on Sunday evening at Augusta National and waited for his pal Tiger Woods to make the limp up 18.

Asked about his highlight of the week, he might have spoken about his incredible escape from the trees on the 18th hole.

Watson beamed about that ridiculous shot and claimed there was nobody else on the planet who would have tried it.

That might be a stretch. Plenty would have tried it, but not many will have pulled it off.

Watson played one of the greatest escape shots we have ever seen from the trees en route to his first Masters victory alongside Scott in 2012.

Harry Houdini would have been proud. Watson has never played that shot again or tried to recreate it.

When asked why, he says he wants the legend to live on in that moment. He did it when he had to, and that's all that matters.

Of his greatest memory from the week, he said: "Truthfully, it's the inspiration of Tiger. Tiger -- forget score. I don't care.

"He might not say that to the media, but forget score, right? It's pretty inspirational.

"[The] ten-year anniversary of my win, but watching him walk, gosh, I cry on a paper cut.

"For him to be able to walk and make the cut is pretty spectacular."

But although he gushes over Tiger, he might look back on this week with a hint of...melancholy?

Asked about if he has any thoughts over his parting of the ways with Scott, Watson explained: "I have no regrets."

He added: "And I don't think he does either. He has made more money now without me. He [said he] needed ten more years.

"I haven't told anybody, but I had some struggles this offseason.

"[I] Wrote a book about some struggles. My wrist, I had a wrist injury all last year. Had some PRP [a substance injected to help healing].

"He is like he needs ten more years, and I gave him -- I felt like a nice retirement package when we split up, but we split up mutually.

"We're still great friends. We hang out. We played practice rounds together a couple of tournaments ago."

He added: "[I am] very thankful and [it is] awesome for a friend of mine to have a great bag like that, right?

"He can now teach another young kid hopefully leadership like he taught me for, what, 15 years?

"He needed ten years for his own personal retirement and things going on in his life, and so we just split up. No big deal.

"I say we're still friends. We still text each other, so behind the door he might not be friends with me, but he has made more money, so now I guess he's happy he left."