Phil Mickelson told the world he finished first in the PGA Tour's PIP race at the end of 2021 - but now it has been confirmed by the PGA Tour that Tiger Woods won it. 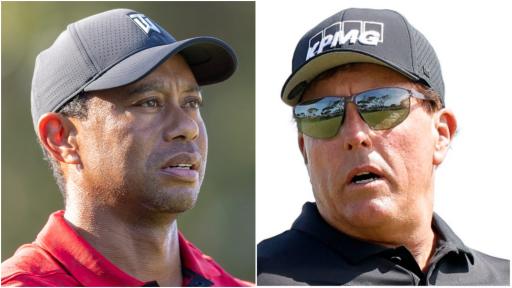 Phil Mickelson may have told the world he won the inaugural PGA Tour Player Impact program (PIP) in 2021, but it has now been confirmed by official sources on the circuit that Tiger Woods won it.

Woods will now receive an $8 million bonus for finishing top of the standings that measures PGA Tour players generating the most positive interest in the PGA Tour based over a number of criteria.

Incredibly, Woods only played at the PNC Championship with his son Charlie Woods in 2021.

The controversy once again surrounds Mickelson though, who on December 29, 2021, tweeted his followers that he had finished first in the PGA Tour's Player Impact Program.

Woods had some fun with the end result on Twitter:

PGA Tour star Kevin Na was wondering if the last two weeks had something to do with the final result?

Who knows, but he makes a good point.

Tiger Woods wins the $8Mil PIP! I’m all for paying @TigerWoods because he made us all richer but he didn’t hit 1 shot in 2021. @PGATOUR how is this possible also I thought @PhilMickelson won. Did this result have any affect in the last 2 weeks? haha

Mickelson in fact came second, so he only lost out on $2 million, but it is yet more bad news for Lefty, who is taking a break from the sport right now following his controversial remarks about the PGA Tour and Saudi Golf League.

Related: Alan Shipnuck has "some damaging information on Phil Mickelson"

Independent auditor Grant Thornton certified the results, and here is the criteria for the PIP money:

PGA Tour players will be playing for an increased pot of $50 million when it comes to PIP money in 2022.

Given Woods played in just one event in 2021, and that was an unofficial father-son tournament, we are fairly certain he might be tough to beat yet again in 2022.

And who knows where Mickelson will be for the duration of this season?

Next Page: GolfMagic visits the TaylorMade Tour Truck - and it's incredible!