PGA Tour: Did Morgan Hoffmann get penalised for this bunker shot?

Morgan Hoffmann got a last-minute spot in the John Deere Classic this week and something strange happened to him in the first round in Illinois. 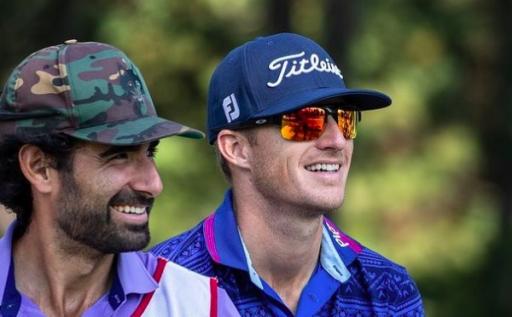 Something very odd happened to PGA Tour comeback player Morgan Hoffmann in the first round of the John Deere Classic.

On the par-3 16th hole, which was his seventh hole of the day, Hoffmann was plugged underneath the lip of the greenside bunker in what was one of the unluckiest breaks we have seen all season.

The 32-year-old splashed his ball out but as it popped up, the ball hit his hat and fell back into the sand. This brought up an interesting rules question.

According to rule 11.1a, if a player's ball in motion accidentally hits a person or an outside influence, there is no penalty to any player.

"It makes sense that it’s not a penalty; I was happy it wasn’t. It was an absurd lie and I was happy to get away with a bogey," he said after his round.

It was almost even better for the American. His next bunker shot hit the pin and nearly dropped in for a miraculous par. Hoffmann carded a 1-over 72 on Thursday at TPC Deere Run to sit 10 shots behind J. T. Poston.

Hoffmann was one of the last players to join the field under a sponsorship exemption when Steve Stricker withdrew on Tuesday. His medical exemption on the PGA Tour ran out at the Travelers Championship last week.

He will need to severely improve in the second round if he is to gain full tour status. Hoffman returned to the tour this year after being away for two and a half years.

He was diagnosed with muscular dystrophy and during his time away, he experimented with holistic approaches and alternative medicine as well as spending time in Costa Rica.

Hoffmann is yet to win on the PGA Tour since his first season in 2012. He came closest when he finished tied second at the Honda Classic in 2017.