Dylan Frittelli was on the wrong end of a ruling during the second round of the John Deere Classic when one of his drives finished inside a tree. 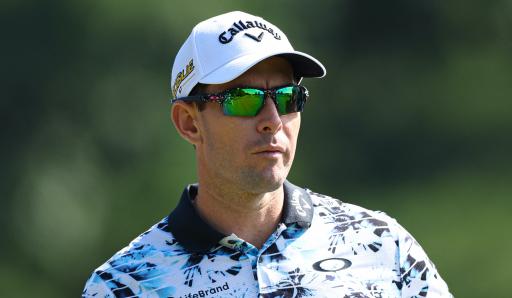 Former John Deere Classic winner Dylan Frittelli was denied a free drop on the par-5 17th hole in round two when he hit his tee shot into the bottom of a tree.

Starting on the back nine on Friday, the South African hit a wayward tee shot on his eighth hole and when he and his caddie found the spot where his ball settled, he felt that it was in a hole from a burrowing animal.

"That's correct. Because you can't make an argument that you might be able to play a shot," the official replied

"I understand but if this burrowing hole goes down another six feet and you've seen it go in that hole and it's keeping the hole, you can't play it, you still don't get relief?

"So if you're in an ant hill and it goes buried inside the ant hill you don't get relief from that? You can't hit it because it's five feet inside an ant hill?"

This was the end of the discussion. Frittelli vowed to seek a second opinion after he was forced to take a drop. He carded a 1-under-par 70 to finish on 6-under-par for the week.

His only PGA Tour victory came at this event in 2019, but he is nine shots behind leader J. T. Poston heading into the weekend in Illinois.

Poston finished tied second at the Travelers Championship last week and he reached 15 -under-par with 36 holes left on Friday in search of his second win on tour.

Next Page: Xander Schauffele "can accomplish anything" ahead of 150th Open Championship