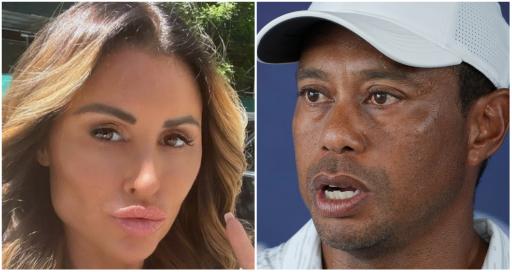 Tiger Woods’ former mistress Rachel Uchitel is reportedly working on an explosive “tell-all memoir” about her affair with the big cat, despite previously signing an $8million non-disclosure agreement promising her silence.

According to a report by Page Six, Uchitel, now a nightclub manager who was linked with the legendary golfer in 2009, is planning on releasing a book that will tell her whole life story and her trysts with Woods.

The publication report that Uchitel will go into extensive detail about her fling with Woods, now 46, which took place whilst he was married to Elin Nordegren and resulted in the end of their six-year marriage.

Woods and Nordegren, a Swedish model, tied the knot in a lavish ceremony in 2004 and together they welcomed daughter Samantha Alexis Woods and son Charlie Axel Woods.

The 82-time PGA Tour winner was inducted into the World Golf Hall of Fame earlier in the year after a moving speech by his daughter Sam, which reduced him to tears.

Woods also revealed his son was named after trailblazing golfer Charlie Sifford, who was the first African American player to play on the PGA Tour. Sifford was inducted into the Hall of Fame in 2004. He died in 2015 aged 92.

Woods’ extramarital affairs were sensationally revealed in 2009 by the National Enquirer. Woods later tearfully admitted to multiple infidelities at a press conference in front of his mother Tida Woods.

Uchitel first spoke about her affair with the athlete in 2021 for the HBO documentary that was entitled “Tiger”.

“One night I was working at the club and I saw Tiger sipping his drink, talking to nobody,” she said in the doc.

“As I went to leave, he took my phone number and the car probably hadn’t even gotten to the light at the corner, he started texting me.

“He said something like, ‘When can I see you again?’"

“It was intimidating, this was Tiger Woods.

“I knew he was married, I knew he had responsibilities. He said, ‘I want you to fly to Orlando and I’ll come see you there.’”

Uchitel later told the New York Times that she fell on hard times and wasn’t able to find work because her reputation was “tarnished” and she filed for bankruptcy.

In the documentary she said: “I’ve had it with NDAs. I wanted for once to be the one to narrate my story. Ten years later, people were still talking about me as a player in a story I had never talked about.

“I felt like it was time to take the reins.”

At the time, it was reported Woods’ team took or were taking legal action for breaching the contract, but it is not clear what became of that.

Uchitel started her career as a news producer for Bloomberg Television and she later went on to become a host for Extra.

Her book will also reportedly touch on the death of her father, Robert, who died of a drug overdose when she was a child.

The next tournament Woods will play will be the JP McManus Pro-Am at Adare Manor in a star-studded field.

He is then planning to tee it up at the landmark 150th Open at St. Andrews.

Woods previously told of his desire to play the Open at the home of golf. He was twice the champion golfer of the year in that venue.

Woods returned to professional golf at the 86th Masters in April, less than 14 months after his car crash which resulted in commuted fractures to his right leg.

The athlete revealed that it was 50/50 his leg was going to be amputated. One of the most recent pictures of Woods shows the true extent of his injury.

Next page: What is Tiger Woods' net worth?