Branden Grace made the best of a bad situation on the 13th hole at TPC Louisiana when his tee shot landed and finished in the middle of a tree stump. 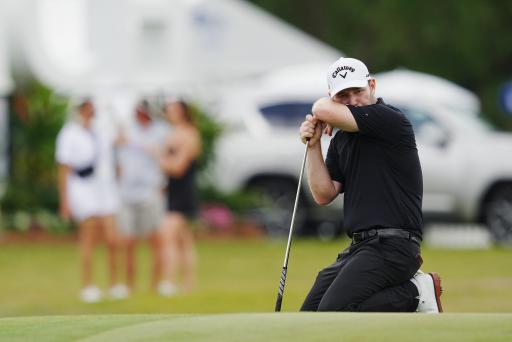 If Branden Grace tried to hit his ball into a tree stump 286 yards away, he would be stood there for a long, long time.

But with one tee shot on the 13th hole in the third round of the Zurich Classic of New Orleans, Grace did exactly that and he couldn't believe it.

The South African hit his drive at TPC Louisiana and it went slightly left of the fairway. It finished in the middle of the tree stump when it could've easily found the fairway just a few feet to the right.

As explained on the broadcast by Craig Winter, the USGA's director of rules and amateur status, Grace had to take an unplayable lie and drop his ball next to the stump.

He hit his next shot to about 20 feet from the hole and he rolled in his putt for an incredible par save. Fortunately, his partner Garrick Higgo made a birdie on the 13th hole.

This is the beauty of the better-ball format when you and your partner can dovetail. It was the South African pair's sixth birdie of the day and they bounced back from a bogey on the 12th hole.

In total, Grace and Higgo made eight birdies and an eagle to shoot a solid 9-under-par 63. They reached 24-under-par after three rounds in Avondale and they are the main challengers to Patrick Cantlay and Xander Schauffele with 18 holes left.

Having broken 60 in the first round on Thursday, the American duo fired a 60 in the second round of the better-ball format on Saturday.

They reached 29-under-par and built a five-shot lead which is the largest 54-hole lead in the history of the event.

Next Page: PGA Tour pro given FRIGHT OF HIS LIFE at Zurich Classic of New Orleans