Joel Dahmen played with Tiger Woods on Saturday, then accused Sung Kang of cheating on Sunday. 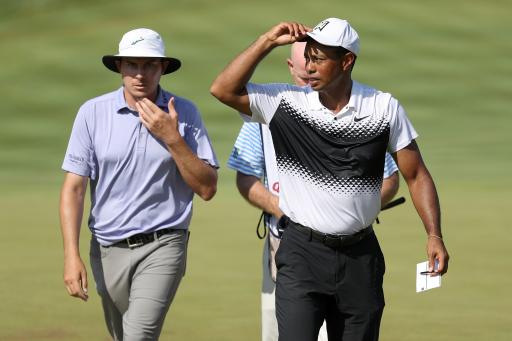 Joel Dahmen has accused his fellow PGA Tour pro and Sunday playing partner Sung Kang of cheating in the final round of the Quicken Loans National.

Kang's second shot on the 10th hole found the hazard, and the South Korean believed his ball had crossed the hazard, giving him a drop on the side of the hazard closer to the hole.

Dahmen disputed that belief, asserting Kang's ball definitely didn''t cross the hazard - and that's where the argument broke out causing a serious backlog on that hole, at one time with four groups waiting on the hole.

A PGA Tour rules official came over and sided with Kang and he was allowed to drop on the side of the hazard closer to the hole, and he won go on to save par en route to finishing solo third and booking his place at The Open Championship in the process.

Dahmen - who played with Tiger Woods on Saturday and finished tied 23rd in the event - was fuming. So much so he took to Twitter to vent his anger at the proceedings.

"Kang cheated," said Dahmen, a cancer survivor who has made 14 cuts on Tour this season. "He took a bad drop a hazard. I argued until I was blue and I lost."

He added: "It was a typical dispute about where or if it crossed the hazard. It clearly did not cross the hazard. We went back and forth for 25 minutes and he ended up dropping closer to the green."

In spite of his protest, Dahmen said he had to sign the card. "At that point there is nothing I can do. If I don’t sign the card, a rules official will. I would just be delaying the inevitable."

Though the Rules of Golf 26-1/15—Procedures for Relief from Lateral Water Hazard allow a player to drop from the last point where the ball rolled into the hazard, Dahmen maintains 26-1/21—Example of Serious Breach of Lateral Water Hazard Rule was at play. But unless video proves Kang wrong, the ruling from the official that allowed Kang to take his drop stands.

The PGA Tour and Dahmen's representatives have not yet responded to comment on the accusation, while attempts to reach Kang proved unsuccessful.