Kevin Streelman made just the second ace of his PGA Tour career at the John Deere Classic and the fans by the green thought they were getting a special souvenir... 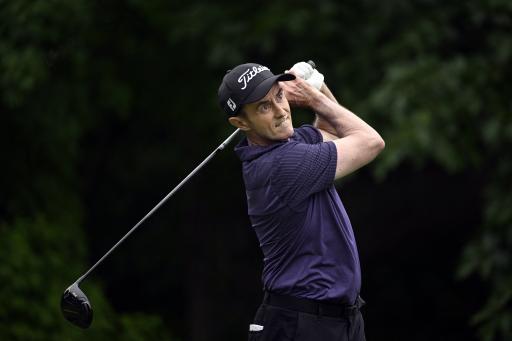 Kevin Streelman may not have been in contention in the final round of the John Deere Classic, but he produced a moment to remember on the par-3 12th hole.

The 43-year-old teed it up on the 189-yard hole and made the ace. It was his first ace on the PGA Tour since the EDS Byron Nelson Championship in 2008.

He did a little dance and celebrated with his caddie on the tee box. He was in the same group as Morgan Hoffman who returned to the PGA Tour in 2022 after a two-and-a-half-year break.

Streelman reached the green and took his ball out of the hole. At this point, many golfers throw their balls to the crowd or a young child so they have a souvenir to keep forever.

As he looked over to the crowd, Streelman gestured to the crowd and faked a throw of the ball. He walked off to the 13th tee box and denied a lucky fan a special moment.

It was a brutal but hysterical way to celebrate making a hole-in-one. Streelman went on to card a 66 on the day to move up to a tie for 41st at TPC Deere Run.

The American has two wins to his name on the PGA Tour, but his most recent victory came eight years ago at the Travelers Championship.

It wasn't a week to remember for Streelman, but it certainly was for J.T. Poston who secured his second win on the PGA Tour in Illinois.

The 29-year-old carded a 69 on Sunday to secure a three-shot win and a place in The 150th Open Championship at St Andrews.