Greg Norman stirred the atmosphere at the weekend in Portland by dishing out free cans of beer to the fans who attended the second LIV Golf Invitational event. 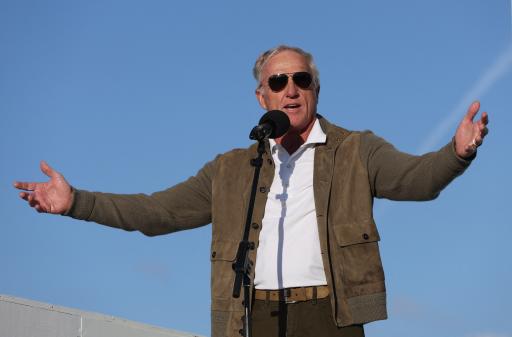 LIV Golf commissioner Greg Norman has promised to "make golf louder" with his new controversial venture and he certainly achieved that over the weekend.

After Branden Grace won $4.375 million on Sunday at Pumpkin Ridge in Portland, there was a raucous and celebratory atmosphere and Norman added fuel to the fire.

From a raised platform, the Aussie dished out free cans of beer by throwing them into the crowd. At one stage, he was pouring beer into the mouth of one particularly excited fan.

Norman may have received a lot of heat for setting up this Saudi-backed series, but the 67-year-old looks to be building a healthy relationship with the fans.

Beer wasn't the only thing being handed out for free at the second LIV Golf event. Much like the first event at Centurion Golf Club, players were giving out free tickets with their personal discount codes.

The party atmosphere was a big takeaway from the weekend. Talor Gooch compared it to the scenes of the Ryder Cup and the Presidents Cup, even though the 30-year-old has played in neither event.

Grace also made an interesting comparison between himself and one of the greatest players to pick up a golf club as the fans circled the final green to see the South African secure victory.

"I'm no Tiger, but that was as close as I'm going to get to feeling what Tiger feels like," the 34-year-old said.

"Coming down the 18th with everybody just surrounding you, chanting your name, it was amazing. I've never experienced anything like that.

"It was just nice that whether it was myself or Dustin or Carlos, whoever made a bogey, they were going nuts, and that's what it's supposed to be like. People are out there, they want to see you put on a show, and I feel that's what we did pretty well today."

Next Page: Stroppy PGA Tour Pro rants to himself before throwing ball in water