Ben Martin led after 54 holes at the Corales Puntancana Championship at the weekend, but he missed a putt on the 72nd hole to force a playoff. 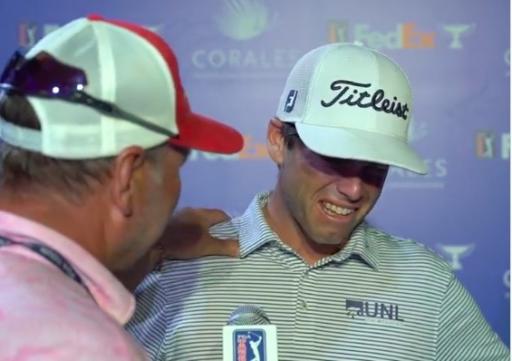 PGA Tour player Ben Martin was overcome with emotion after missing out on a playoff to win the Corales Puntacana Championship.

Martin, who won the Shriners Hospitals for Children Open in 2014, led after each round in the Dominican Republic but he started his final round with a double-bogey.

He bounced back with for birdies on the front nine to get himself back into contention. After playing the 501-yard par-4 18th hole perfectly, Martin had a good look at birdie to reach 17-under-par.

This would've been enough for a playoff with the eventual winner Chad Ramey, but he rolled his putt over the left lip to card a 70 and finish in tied second.

Martin missed nine cuts on the PGA Tour last season and he has missed two cuts in four events this season. He was on the edge of victory last week, which is why he couldn't hold back the tears in his post-round interview.

Related: Scottie Scheffler: What's in the bag of the new World No.1?

"It was great man. It was great, I loved every minute of it," his caddie said in an attempt to comfort him. It took the 34-year-old a couple of minutes to compose himself.

"That was obviously difficult. I've won out here before, I've won on the Korn Ferry, runner-up in the US Amateur, but I guess I wanted this one a lot more," said Martin.

"I don't think I've ever been emotional about golf, so this is a first. To me that's a good thing, it means I competed hard and it obviously stung.

"I hit two good shots into 18. To have such a good opportunity and not capitalise is the most difficult part.

"I wrote down this morning, I was nervous going into the day not being in this position for a while, but ultimately, however, I hit the golf shots today, nothing I really care about in life is gonna change."

With the Corales Puntacana Championship being played alongside Scottie Scheffler winning the WGC Match Play and becoming World No.1, we have certainly seen contrasting emotions of agony and ecstasy.