Tommy Fleetwood's caddie has posted his opinion of the remarkable moment Chris Rock was slapped by Will Smith at The Oscars. 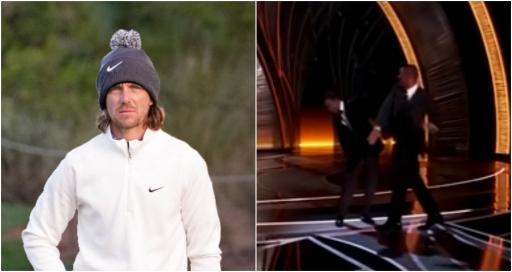 Tommy Fleetwood's caddie Ian Finnis says Chris Rock "got what he deserved" when he was slapped by Will Smith at The Oscars.

Comedian Rock, 57, was on stage to present an Academy Award where he made a "GI Jane 2" joke at the expense of Smith's wife.

Jada Pinkett Smith, 50, has detailed her struggles with the hair loss condition alopecia and did not look amused at what Rock said.

Related: Best golf memes after Will Smith smacks Chris Rock at the Oscars

Smith was filmed laughing, too, but got up on stage in front of millions of viewers and slapped The Longest Yard actor across the face.

He sat back down and said: "Keep my wife's name out your f---ing mouth." He repeated that line as Rock said it was "just a GI Jane joke".

After striking the comic, Smith shouted: “Leave my wife’s name out of your f***ing mouth” pic.twitter.com/o5dQumuYrZ

The moment sent the Internet into meltdown as people speculated whether or not the moment was staged. Rock looked visibly stunned.

Smith, 53, later picked up the first Oscar of his illustrious acting career for his role in the movie King Richard.

The Fresh Prince of Bel Air actor plays the father of Serena and Venus Williams in the movie.

Smith apologised to the audience for what happened in a tearful acceptance speech effectively confirming what happened wasn't staged.

"Art imitates life," he said. "I look like the crazy father, just like they said about Richard Williams. But love will make you do crazy things."

Everyone has their own opinion over what happened. Tommy Fleetwood's caddie posted:

Fair play to Will smith , Why apologise !! Upset his wife so Chris Rock got what he deserved