Patrick Cantlay and Xander Schauffele remain in front at the Zurich Classic on the PGA Tour after moving day. 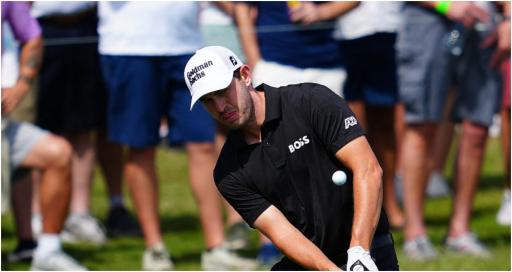 The American duo opened their week with a stunning 13-under 59, followed that with a 4-under 68 and almost carded their second 59 of the week during Saturday’s third round.

They also have the largest 54-hole lead in the tournament’s history as they are five strokes better off than their nearest competitors. Sunday’s format, foursomes, means birdies are harder to come by.

Schauffele went for it at the par-5 18th and was a matter of inches from securing their second sub-60 18 holes of the week but his eagle putt drifted past the cup at the last second.

Still, 10 birdies and an eagle seemed almost as if we were watching an exhibition event. It was an absolute masterclass from the American pairing who became good pals at the Ryder Cup.

Cantlay and Schauffele, sitting atop the leaderboard at 29-under par, lead the South African pairing of Branden Grace and Garrick Higgo.

Grace had the most unfortunate break of the day when his tee shot at the par-4 13th landed inside a dead tree stump. He had to take an unplayable and still escaped with a par.

Three groups are at 23-under in a tie for third place. They are the pairings of Sam Burns and Billy Horschel, Aaron Rai and David Lipsky and Aussie duo Jason Day and Jason Scrivener.

Day said: “We can't really get too far ahead of ourselves.

“We've just got to just stay as present as possible and just hit the shots when they come and just add them up at the end of the day tomorrow.

“The guys that are leading right now, Patrick and Xander, they're playing some phenomenal golf, so they're going to be very difficult to catch and to pass tomorrow.”

PGA Tour pro Callum Tarren also had the shock of his life when he didn’t realise a gator was nearby as he strode to his golf ball.

Watch the gator chaos below

Not your typical hazard