Sam Burns puts his third PGA Tour victory into words and describes just why we saw that celebration at Innisbrook Resort. 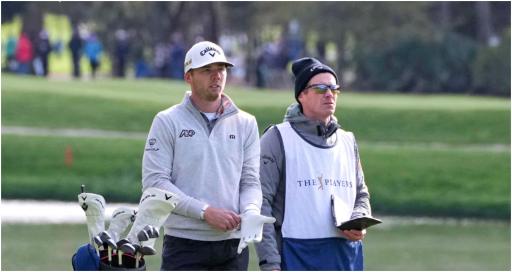 Burns, 25, is now a three-time PGA Tour winner after he successfully defended his title at Innisbrook Resort with a dramatic playoff win over Davis Riley.

The win put him at number 10 in the OWGR and he's joined Cameron Smith, Hideki Matsuyama and Patrick Cantlay with three PGA Tour wins in the last 12 months.

Usually a stoic figure, Burns roared with delight when he watched his birdie putt drop at the Snake Pit. Pure delight. Greenside, PGA Tour pro Joel Dahmen was waiting to give him a bear hug. He'd also kept a spare beer in his back pocket such was his faith in his pal.

It was such a clean round until he got to the par-3 17th. Burns sent his tee shot way left into the greenside bunker and didn't judge his and shot the way he wanted.

Then he sent his chip racing past and had to sink a gutsy nine-foot putt for a bogey. Burns admitted in his winner's press conference he wished he had not seen Thomas hit first as the wind did not touch his shot. It put him on edge. A bad swing followed.

When asked how the moment felt, Burns said: "It felt like it looked. Yeah, I just think that after last week, the last couple weeks, I've tried to conserve as much energy as possible, and all through today just trying to make sure that I never got kind of too high or too low and just tried to stay kind of even-keeled. And to see that go in, I mean, that's just what I felt.

"The last time I was in a playoff was the WGC in Memphis. Hit a really good shot on the second playoff hole to six feet and thought I hit a pretty good putt and it lipped out. So that stung, that one hurt a lot. So to be able to make that putt just it felt like it looked."

Burns admitted to the media he felt drained after a tough few weeks. He was in contention at The Players but saw his charge fizzle out on the final day at TPC Sawgrass.

How did it feel holding it together at 17?

Burns said: "Yeah, I think that honestly I wish I would not have seen JT hit first. The wind did not touch his ball, so I tried to take something off a 5-iron and just hit a poor shot.

"And then the bunker shot, it was kind of tricky just because I felt like if I landed on the green it was going to get away from me to the right.

"So I was trying to land it kind of close to the edge and just came up a touch short.

"And then the chip came out funny, it came out a lot hotter than I thought it was going to. I just tried to read the putt to the best of my ability and I just told myself, just best stroke of the day, whatever happens, happens."

He admitted he was unaware Riley had made a catastrophic triple bogey to throw away a two-shot lead early on Sunday. Still, the rookie composed himself and battled back into a playoff. Both Thomas and Burns feel as though he is a world-class player in waiting.

Burns said watching Riley have a 15 foot putt for the win was tough because he had no control. He said he wanted "one more chance to have my say".

Burns did have that chance. And he took it. Just how far can he go?