Emiliano Grillo has the best possible response to Charley Hoffman's rant about his ruling and the PGA Tour. 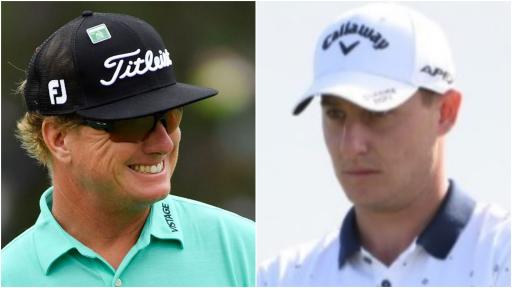 Hoffman sounded off on the PGA Tour officials for "putting out a terrible penalty area line" before claiming the PGA Tour offers "no accountability at any level" and "no protection for the players at all."

The four-time PGA Tour winner took aim at the circuit after hitting his tee shot into the water at the par-5 13th hole. He then dropped his ball to play his third stroke, only despite settling on the ground his ball then rolled back into the water.

Charley Hoffman going OFF on the USGA and PGA Tour after having to take what he felt was an unfair penalty today. “No accountability at any level here. No protection for the players at all. You wonder why guys are wanting to jump ship and go play on another tour.” Woah. pic.twitter.com/NpFyxQ4Ujc

Hoffman was forced to take another penalty stroke, even though he thought the USGA had changed that rule, which made his next shot his fourth stroke.

He then went on to record a double-bogey seven.

"I was under the impression that the @usga had changed that rule," Hoffman wrote in his post.

"I was wrong. Had to take another penalty for doing nothing wrong at all. Did everything by the book. It's still mind blowing that a group of amateurs rule the professional game of golf.

"I also blame the @pgatour rules officials for putting out a terrible penalty area line where this could even happen. No accountability at any level here. No protection for the players at all. You wonder why guys are wanting to jump ship and go play on another tour. Players need transparency, protection and consistency. We don't have that under the current governing bodies."

Probably my favorite thing I’ve ever been tagged in. Just a rattled Charley Hoffman fuming thinking “alright I’ll tag the main outlets, the tour, the Saudis, and… Riggs! Riggs will handle this” pic.twitter.com/VT87FsLu6D

Bryson DeChambeau and Phil Mickeslon then chimed in with "I feel ya" and "agree wholeheartedly", no doubt just to fuel the Saudi Golf League speculation even further following Hoffman's tagging of the Saudi International in his post.

But one comment that really made us tickle was from Emiliano Grillo, who wrote: "Don't hit it there" followed by three laughing emojis.

Hoffman's comments have caused outrage in the golf world today.

Charley Hoffman has been ranked in the top-20 of the OWGR for a total of 1 week in his career. He has never finished better than 8th in a major championship. He has $32.1M in official PGA Tour earnings.

Despite winning four times on the PGA Tour, Hoffman has only found himself in the world's top 20 for one week of his career.

He has amassed more than $32 million in career earnings but his best finish in a major is a tie for eighth at the 2017 US Open.

While we cannot be certain which PGA Tour players will yet be making the move to a new Golf Super League backed by Saudi billions, it would seem Hoffman, DeChambeau and Mickelson will be more than happy to make up the first three-ball.

NEXT PAGE: BRYSON HAS SUPPOSEDLY BEEN OFFERED $240 MILLION TO JOIN A SAUDI GOLF LEAGUE