Peter Uihlein pulled his tee shot on the par-3 16th hole and his ball almost finished in the pocket of a spectator who was sat by the green. 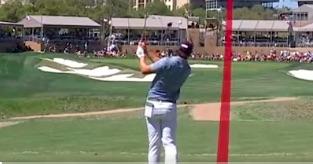 If PGA Tour player Peter Uihlein tried to hit the exact same shot that he hit on the 16th hole on Saturday at the Valero Texas Open, he would be there for some time.

The American was on 3-under-par for the event when he arrived on the tee box of this 190-yard hole. But he hooked his shot and it was sailing toward the spectators.

As soon as he hit it, Uihlein knew it wasn't the shot he wanted, but what he didn't know was the incredible position where his ball ended up.

From the footage below, it is tough to tell if the ball bounced or if it landed straight into the lady's chair as she was sitting there. Fortunately, she wasn't harmed. In fact, she was entertained.

What other sport gets you involved in the action like this?? pic.twitter.com/ZlCgk4jPPR

"It's in my chair!" She shouted to the other spectators who were sitting around her. She remained very still while the ball was positioned next to her water bottle.

The likelihood of a PGA Tour player's ball finishing in such a place is non-existent and this woman was definitely shocked to look down and see Uihlein's ball in her chair.

Unfortunately for the 32-year-old, who won the US Amateur in 2010, he went on to make a bogey and card a 4-over-par 76 in the third round at TPC San Antonio.

Uihlein is yet to win on the PGA Tour and he hasn't found his best form in 2022. He hasn't achieved a top-25 finish and he has missed five cuts.

Brandt Snedeker, Beau Hossler, J.J Spaun and Dylan Frittelli all share a four-way tie for the lead on 10-under-par heading into the final round.