Tiger Woods' name was spotted by a golf fan at Augusta National as speculation builds about his participation at The Masters. 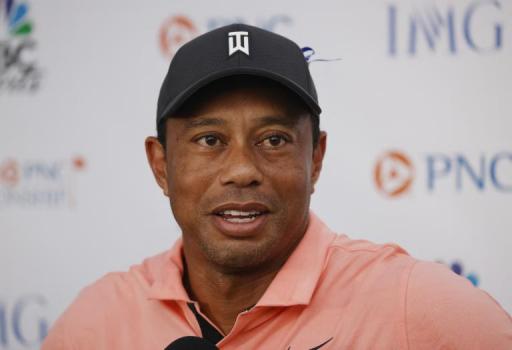 Tiger Woods' name appeared on one of the giant official scoreboards at Augusta National, strongly suggesting that he will participate in The Masters.

According to @TWLegion on Twitter, Woods was spotted on one of the iconic white scoreboards by a fan who attended the Augusta National Women's Amateur in the week.

This could suggest that those who operate these scoreboards, similar to the ones at The Open Championship, have been told to keep the panels with his name on in case he does compete.

As well as Woods appearing on the course scoreboards at Augusta National, he is still on the entry list which can be found on the official Masters website.

According to Sports Illustrated, the 46-year-old is set to visit Magnolia Lane again today. Earlier in the week, he played a practice round with Justin Thomas at the famous venue.

#NEW: WOODS was listed on the big scoreboard at Augusta today as tournament officials prepare for the #TheMasters (via follower @tvining13 who was at the Women’s Amateur)

If the five-time Green Jacket winner does travel to Georgia later today, this doesn't mean he will compete in his first event since The Masters in November 2020.

He told Jim Nantz and Sir Nick Faldo at the Genesis Invitational in February that he would attend the Champions Dinner, but he was hesitant to say if he would compete.

Woods has always said 'hit n' giggle' events are his limit, such as the PNC Championship which he played with his son Charlie back in December.

Part of his scouting mission earlier in the week was also to walk the terrain and to test his body, primarily his right leg, on the hilly Augusta.

The injuries he sustained from his serious car crash have kept him out of action on the PGA Tour since February 2021.

Next Page: Valero Texas Open R3: Four tied at the top, Jordan Spieth off the pace