Bryson DeChambeau joined the popular golf YouTubers Dude Perfect as they had exclusive access to Amen Corner at Augusta National. 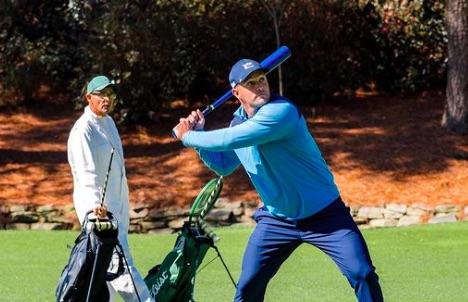 Bryson DeChambeau took part in an exclusive video with Dude Perfect, the popular golf YouTubers, at Augusta National ahead of The Masters.

Dude Perfect has over 57 million subscribers and one of their classic challenges is the All-Sports Battle. They use a number of different sports items such as a tennis racket, football and frisbee instead of golf clubs.

They gained exclusive access to Amen Corner and invited DeChambeau to join them. Hosted by legendary golf broadcaster Jim Nantz, the group began on the 11th hole.

The former US Open champion began his round with a tennis racket, but when he got to the green, he showed the group his PGA Tour pedigree.

The 28-year-old used a croquet mallet and he almost holed a treacherous downhill putt which lipped out. After the first hole, he was one shot behind Tyler and Garrett.

They moved on to the next hole, the par-3 12th hole. He began with the tennis racket again and he reached the green after using three different items.

When they walked off the 12th green, Coby and Cory had been eliminated and they moved on to the par-5 13th hole. It was certainly a slog and DeChambeau holed a snooker-style putt to force a playoff with Tyler and Garrett.

The playoff was simple. They went to the 16th hole and played closest to the pin, but they had to skip their balls across the water in front of the green, like Jon Rahm did when he made a hole-in-one during a practice round at The Masters in 2020.

Although DeChambeau hit a solid shot to 85 feet, Tyler hit a very impressive shot to 25 feet to win the challenge. Although he didn't win the battle, it was certainly something different for DeChambeau to take part in ahead of The Masters.