PGA Tour pro Seamus Power doesn't quite know how to react to his super fan at the Travelers Championship. 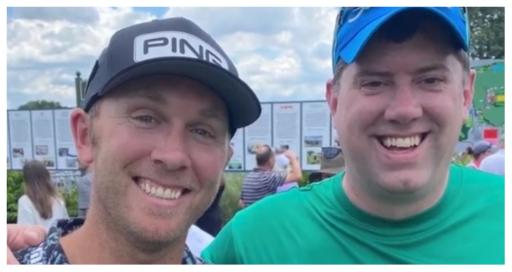 Ireland’s Seamus Power has been playing some extremely good golf over the last few years, but he did not expect this.

Power, the World No. 36, is playing the Travelers Championship on the PGA Tour at TPC River Highlands this week.

He’s having a good tournament and at the time of writing was T-7 heading into the weekend in Connecticut.

During the second round of the event, something caught the 35-year-old’s eye.

It was plastered on a tee shirt of apparently one of his bigger fans. The Irishman even stopped to get a picture with him.

T7 with a super fan right by his side.@Power4Seamus is loving every moment @TravelersChamp. pic.twitter.com/cNpBoqqJ9J

Anyway, Power has gone 67-65 to get sneak inside the top-10 heading into the weekend.

He said of his fan: “Yeah, it's been amazing. Obviously 18 months ago that wouldn't have been a thing.

“I like it. It's cool. Hopefully I can get some more people like that, more fans going forward.”

Power is looking forward to an exciting stretch of golf over the next few weeks. After playing here, he’ll head back home for the Irish Open.

Then he will peg it up at the landmark 150th Open at St. Andrews.

If Power does continue to play well over the weekend, it will be his fourth top-10 of the season.

His lone victory on the PGA Tour came at the 2021 Barbasol Championship.