Why Jason Kokrak was disqualified from Travelers Championship

Jason Kokrak was disqualified from the Travelers Championship on the PGA Tour at TPC River Highlands. 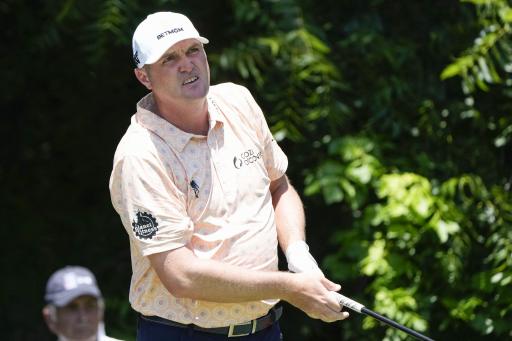 The details are scant, but Jason Kokrak was involved in perhaps one of the most bizarre disqualifications on the PGA Tour this season.

Playing his second round at the Travelers Championship, Kokrak was playing the ninth hole at TPC River Highlands (his 18th of the day) when he piped his approach over the back of the green.

Shot tracer reliably informs us that his second ball travelled into “Unknown”. And that, for Kokrak, was enough for the 37-year-old three-time PGA Tour winner.

Kokrak was disqualified for not recording a score at the final hole. Apparently, Kokrak just got in his car and drove off. Well, he was going to miss the cut anyway.

Some golf fans speculated that Kokrak was driving off to LIV Golf with the PGA Tour in his rear-view mirror. Ciao.

Although golf journalist Jason Sobel reported that Kokrak simply did not want to hold up the group behind and as he was going to miss the cut anyway he didn’t want to mess around.

Kokrak did in fact try and look for his ball briefly. But it was a skull from 87 yards that he blasted into the rough. No chance finding that.

Texted with Will McGirt, who was playing with Kokrak. They didn’t realize the ball went OB. By the time he could figure out where to drop, the group behind was waiting. He didn’t want to hold them up and was going to MC anyway. But it wasn’t some walk-off from PGA Tour life.

The American is ranked No. 33 in the world. He was widely assumed to be heading to LIV Golf after comments he previously made about wanting to make as much cash as possible before he retired.

Kokrak is a Golf Saudi ambassador but he wasn’t in the field for the inaugural LIV Golf event at Centurion Club just outside of London two weeks ago.

Nor he is named in the field for the next event in Portland, Oregon in Portland Ridge.

Brooks Keopka, Bryson DeChambeau and Abraham Ancer will be in the field alongside the likes of Phil Mickelson and Dustin Johnson.

The golf war escalated yesterday when the DP World Tour issued £100k fines for the LIV Golf rebels and banned them from playing the three events co-sanctioned by the PGA Tour.