Rory McIlroy on his comedy of errors at Travelers: "Came out of the blue!"

Rory McIlroy reflected on his 12th hole nightmare at TPC River Highlands during the second round of the Travelers Championship. 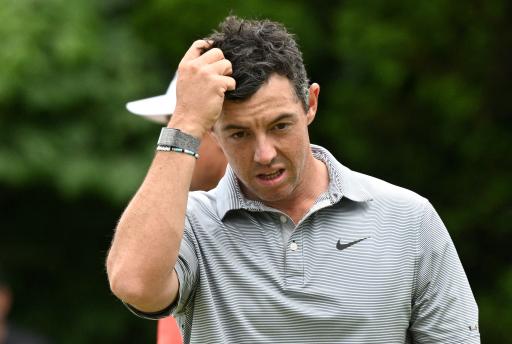 You could argue that nobody makes golf look easier than Rory McIlroy but at the same nobody makes it look harder.

The Northern Irishman, now 33 years old, still remains box office viewing on the PGA Tour for a variety of reasons but he made an absolute hash of his back nine during the second round of the Travelers Championship.

McIlroy’s round unravelled on No. 12 at TPC River Highlands when he was forced to write down a snowman on the scorecard on the 390-yard par-4.

It was difficult to watch. A real comedy of errors. At least it wasn’t a major. Yet despite this, and also another double bogey on his closing holes, the Ulsterman notched a level par round.

He fell six shots adrift of the leader Xander Schauffele, who after 36 holes was the only player in the field to remain without a bogey.

He said: “Yeah, I mean, seven birdies is a good thing. But, yeah, I mean, I had a four-hole stretch there on the back nine where I lost obviously two fairway -- well, three fairway wood shots are what cost me.

“For whatever reason I haven't been comfortable with my fairway woods the last couple weeks. You know, I just hit three loose ones there, two on 12 and then the one on 15. That was really it. I played well the rest of the way. Obviously got off to that great start.

“I thought I came back well. I made a good putt for 6 on 15 and then birdied 16. Yeah, I should be closer to the lead. Feel like I let a lot of guys into the golf tournament because of it.

“But, you know, it's still only two rounds. There are two rounds left and a lot of golf left.

Of his errors, he added: “Yeah, it's golf sometimes, I think. Yeah, I mean, it sort of came out of the blue. I haven't made a big number like that or couple big numbers like that in a long time.

“You know, when you hit a tee shot like on 12, the first one, the second one is pretty difficult, you know, and you're sort guarding against the left one and I missed it right.

“Yeah, I mean, again, it was just one of those. I put myself in a great position in this the tournament and then just three bad swings have sort of cost me six shots.

“You know, I've got all that work to sort of try it makeup over the weekend. At least I have the time to do it.”

McIlroy admitted that he will spend time before round three hitting his fairway woods so he can feel more committed over his tee shots.

McIlroy is searching for his 22nd PGA Tour victory.