Grayson Murray loses the plot in the final round of the US Open. 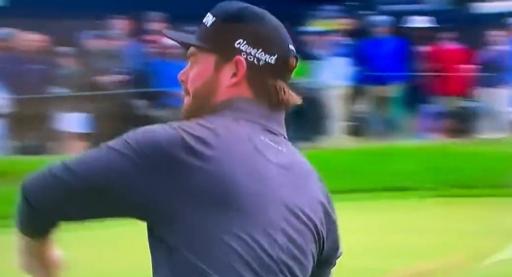 Grayson Murray was seen launching his putter over the back of the green after making a quadruple-bogey eight on the 7th before then snapping an iron over his knee on the 10th in the final round of the US Open at Brookline.

Of course making an eight is always going to be frustrating but given Murray was already well down the leaderboard at the time, the reaction seemed a little strange.

Murray tapped his ball away and then trudged off the green to hurl his putter with venom to the shock of the gallery and those in the commentary box.

After playing the 7th, Murray found himself at 4-over par for the round and he then went on to triple the 9th to go out in 7-over par.

Grayson Murray with a quadruple bogey & a relatable reaction pic.twitter.com/QoMeHH16R2

Here's how others reacted on social media:

If I was the director of @SkySportsGolf I’d have the camera on @GraysonMurray, marvellous entertainment.

Never mind the fine for Grayson Murray, that should be an instant DQ ... #USOpen

Murray found the middle of the fairway at the par-4 hole measuring 504 yards.

But he then sent a mid-iron left of the green into the rough.

Digusted by the shot, he walked over to his bag and snapped the iron over his knee.

Grayson Murray is going to be playing with three clubs by the time he hits the 18th pic.twitter.com/zvz33nQQis

He then duffed his chip shot in front of him before chipping down to four feet for bogey.

Murray opened the week with a 75 but recovered to make the cut mark with a brilliant 67 on Friday.

He would however fall back into the pack with a 76 in the third round, and he ended up carding an 80 on Sunday.

Murray has had an ongoing rift with Kevin Na, which you can learn more about in the link below.

Next Page: The fierce rivalry between Grayson Murray and Kevin Na continues at the US Open