This young boy named Phoenix was born with two clubfeet and he shared his experience with the World No. 1 golfer 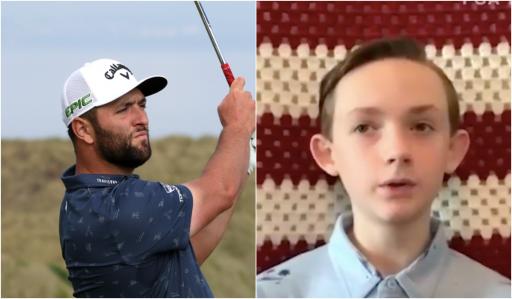 World No. 1 Jon Rahm spoke to who he described as "the strongest man he knows" this week. He is a young boy named Phoenix, who was born with two clubfeet.

Phoenix is a patient at a Shriners Children's Hospital after he needed treatment to his feet and ankles when he was born. The pictures and footage of his rehabilitation are truly incredible.

"I was two months old, the doctor bent my feet a little bit out and then they put casting on," Phoenix explained to Rahm.

When Phoenix was just four years old, his surgeon suggested that they should restart casting his feet and do it again to surgery from being necessary.

Shriners Children’s patient Phoenix, like @JonRahmpga, was born with clubfoot.

After hearing his incredible story, Jon calls him the strongest man he knows. pic.twitter.com/jbxOHswxGn

Now, Phoenix is able to walk and play golf thanks to the work of the fantastic surgeons and doctors at the Shriners Hospitals for Children and he has a very similar swing style to Rahm.

When the Spaniard was born, the doctor essentially broke his ankle and put it in a cast straight away to treat his clubfoot. When he was three years old and when he was six years old, he received surgeries on his foot.

RELATED: JUSTIN ROSE ON HIS RYDER CUP SNUB: THERE WAS A WEIRD FEELING THAT SUNDAY

He revealed to Phoenix that his right leg is shorter than his left leg and his right foot is a size and a half smaller than his other foot. His limited mobility is the reason for his short and sharp swing.

"When you have what we have and your feet are working different, if you try to do too much, you might lose that balance. We don't have the same mobility and strength that other people do," Rahm explained.

This story is incredible! @JonRahmpga had one more surprise up his sleeve, check it out! We can't wait to see you in Scottsdale, Phoenix! #RESPECT @WasteManagement @tpcscottsdale pic.twitter.com/1TGSafmrXS

Both Rahm and Phoenix experienced extreme adversity when they were children and underwent treatment that most people wouldn't undergo in their whole lives.

Rahm did not just want to speak to Phoenix about his story, but he also invited him to join him at the Waste Management Phoenix Open at TPC Scottsdale when the tournament next comes around.

The 2021 US Open champion was visibly honoured to speak to Phoenix, who has dreams of becoming a professional golfer of his own.

NEXT PAGE: JON RAHM: HOW MUCH IS THE SPANISH GOLFER ACTUALLY WORTH IN 2021?

PGA tour
jon rahm
phoenix
shriners hospital for children
Waste Management
Previous
Justin Rose on his Ryder Cup snub: There was a WEIRD feeling that Sunday
Next
Tiger Woods: Remembering his FIRST PGA Tour title 25 years ago on this day